RoboClam Is A Digging Machine

Scientists get some tips from one of nature's best diggers. 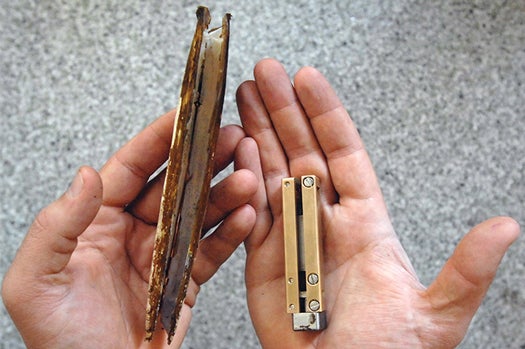 The razor clam, rarely heralded for its agility, is an amazing digger. So engineers at MIT stole a few tricks from the slim, candy bar–size mollusk to build an efficient aquatic machine called RoboClam.

To burrow, a razor clam begins to squeeze its shells together. Surrounding sand falls into the newly created space. Further squeezing draws water into the mix, making a pocket of quicksand that the clam pulls itself through with ease.

The RoboClam works similarly.In version 2.0, now in progress, an electric actuator expands and contracts three aluminum wedges to turn nearby sand into a slurry. A weight allows the cylindrical unit to sink slightly, and the process repeats.

“A razor clam can dig one third of a mile through underwater soil on the amount of energy in a double-A battery,” says mechanical engineer Amos Winter. RoboClam 1.0 uses 10 times as much, but since it has more mass, its efficiency is comparable. And unlike existing industrial diggers, Robo-Clam doesn’t use exponentially more energy as it goes deeper.