Your Body Can Kill Cancer. It Just Needs Better Instructions.

Researchers have been programming peoples' immune systems to recognize and destory cancer. 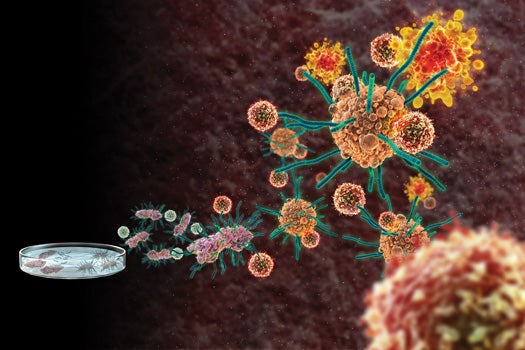 Part of what makes cancers so insidious is that they’re not invaders: They’re our own cells turned against us. That means the body usually doesn’t see them as a threat. But over the last few years, teams at several different research institutions have been programming peoples’ immune systems to recognize and destroy cancer. So far, clinical trials of about a hundred terminal leukemia patients have shown some lasting effects. A single treatment has kept two of them cancer-free for three years and counting—after everything they tried had failed. Applying the technique to more cancers requires finding new targets to attack, says Michel Sadelain, an immunologist at Memorial Sloan-Kettering Cancer Center who pioneered the approach. Exploratory clinical trials, including for lung and prostate cancers, are getting under way.

1) Capture T cells (the immune system‘s attack force) from the blood of a patient with B-cell leukemia.

2) Genetically engineer the T cells to train their sights on the CD19 molecule, which sits on the surface of B cells and the cancer cells that arose from them.

3) Inject the patient with the modified T cells, which may then destroy all cells with CD19—both cancerous and not.

4) Bolster the patient’s immune system with treatments of antibodies, since B cells normally make antibodies needed to fight infection.