Will There Be An Earthquake Near You? New Map Shows Risk

There is a surprisingly high risk of an earthquake in parts of the Midwest. 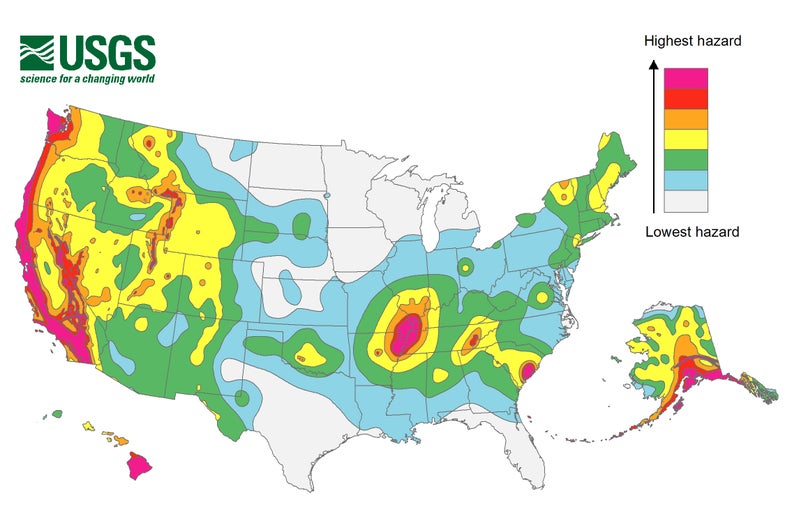 Will there be an earthquake near you in the near future? Well, I won’t claim to be able to tell the future, but the U.S. Geological Survey has just released a new map using the the most up-to-date hazard assessments for a temblor in your region, which incorporates “more than 100 years of global earthquake observations, widely accepted seismology-based principles, and a long history of scientific analyses in the science and engineering communities,” the USGS noted.

This is the first comprehensive map since the last one, made in 2008. Since then, new research–and information provided by earthquakes themselves, which can tell geologists much about the structure of deep underground faults when they rupture–has suggested that relative to 2008 scientists think there is an increased risk of earthquakes in the Carolinas, the Northeast generally, San Diego and San Jose, California. For our Midwestern friends, scientists think that the New Madrid Seismic Zone, which encompasses a broad area around southern Illinois to northern Louisiana, is more likely to yield a quake over a broader area than previously assumed.

However, geologists have slightly downgraded the risk of an earthquake in Irvine, Santa Barbara and Oakland, California, as well as New York City.

While all state have a slight chance of a quake, 42 of the 50 states have a reasonable chance of experiencing damaging ground shaking from an earthquake in the next 50 years, the USGS noted. The 16 states at highest risk are Alaska, Arkansas, California, Hawaii, Idaho, Illinois, Kentucky, Missouri, Montana, Nevada, Oregon, South Carolina, Tennessee, Utah, Washington, and Wyoming.