No, People Don’t Have To Watch The Sunrise On TV In China

"Look at the screen. It must be morning." 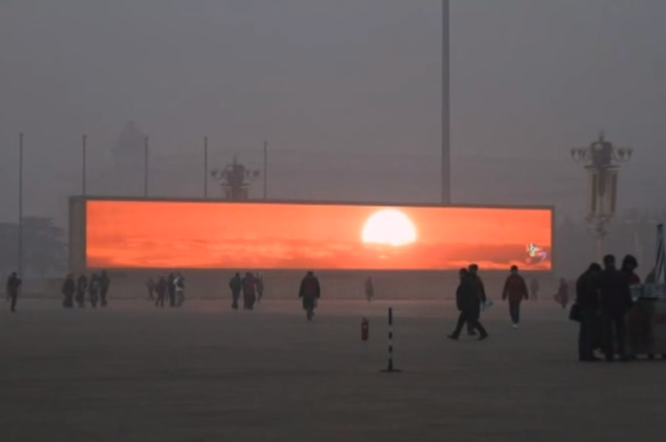 Rise and glow! In addition to the dull lightening of smog that now denotes morning in the polluted city of Beijing, the glow of an electronic rising sun on television has been added to simulate the real thing… or so news reports from the Daily Mail and others would have you believe, with headlines like “China starts televising the sunset on giant TV screens because Beijing is so clouded in smog.”

As Quartz and others have noted, however, this is false. The image of the giant sun (above) was part of a tourism commerical, and the sun only appears for about 10 seconds. It is also shown regardless of weather conditions.

Nevertheless, the smog really is terrible in Beijing. As Climate Progress reports:

On Thursday [Jan. 16], the city issued its first warning of the year for a wave of dangerous smog that exceeded the worst threshold in the warning system. Concentrations of PM2.5, a recently classified carcinogen, were 350 to 500 micrograms per cubic meter on Thursday morning. Later that afternoon, the air quality monitors at the U.S. Embassy in Beijing recorded a sickening 671. The World Health Organization (WHO) considers 25 or less micrograms per cubic meter ideal for human health. Above 300 is considered hazardous.

Smog and outdoor air pollution continues to be a major concern in China; and one study found that it contributed to 1.2 million premature deaths in 2010 alone.

But that is no excuse for making up fictitious story lines about how bad it is to live in China or its capital.