Laser beams make a bright 1960s idea portable for those with Parkinson's disease and parkinsonism. 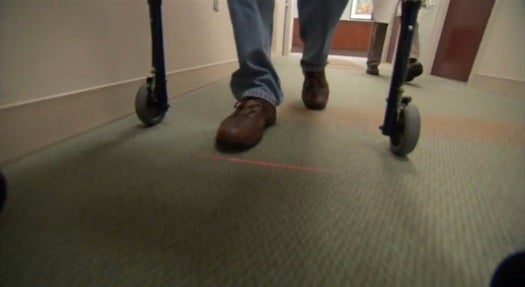 Parkinson’s disease and related disorders can make it difficult for people to walk, as their steps become shorter and stiffer. As early as the 1960s, however, doctors noticed that visual cues could help some patients walk with longer, more natural steps again. For example, studies showed that patients could walk more naturally when they looked at a series of white lines marked on a dark floor.

The world isn’t usually so conveniently marked, but, over the past few years, researchers have developed a way for patients to take the lines with them. They’ve made laser walkers and walking sticks that project a red laser line onto the ground. Reuters has a new video showing a man with parkinsonism using one such walker. Four years ago, Wayne Puckett was wheelchair-bound, but since his doctor suggested he try a laser walker, he’s been on his feet, Reuters reports. His doctor, Jay Van Gerpen of the Mayo Clinic in Florida, developed the walker Puckett uses.

There’s still some work for researchers to do before they’ll know how much help most people with parkinsonism. A couple of studies have found laser devices do help, while other studies found no difference between Parkinson’s disease patients using normal walkers and patients using a laser-equipped ones.

Meanwhile, Puckett seems pretty pleased. In one of his most endearing quotes, he describes his skepticism when Van Gerpen first offered him a laser walker. He is a father of five, Reuters reports, and for just a few seconds, it does sound like he spends a lot of time around teenagers. “I was like, there ain’t no way,” he says. “I was like, whatever, and he gave me this thing and I was like, wow. And it worked.”