CERN physicists have made a particle that likely existed for just a microsecond after the Big Bang. 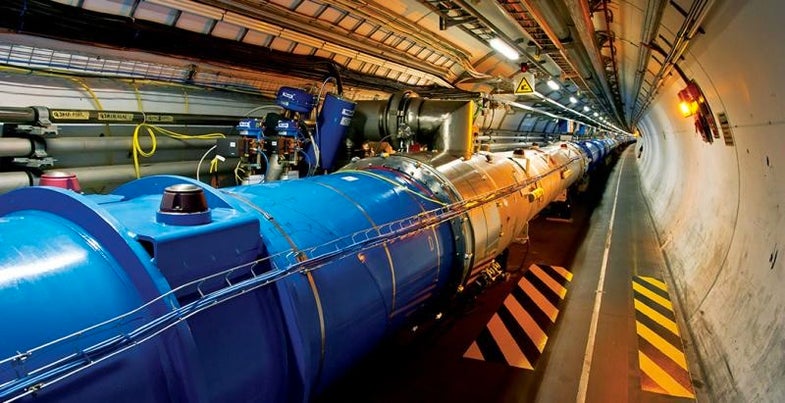 Using the most powerful particle collider in the world, a research group at CERN has forged a particle made of four quarks, the European organization announced yesterday.

Most particles of matter in the universe today consist of two or three quarks. Over the past decade, however, particle-accelerator projects all over the world have gathered some evidence that a few different kinds of four-quark particles might exist. Physicists give such particles names starting with the letter Z. “These Z particles, you can think of them as a new type of matter,” Eric Swanson, a University of Pittsburgh particle physicist who wasn’t involved in the CERN research, tells Popular Science.

The Z particles the CERN group found go by the name Z(4430). They’re extremely short-lived and exist only in extremely high-energy environments. Physicists think they would have been abundant in the universe a microsecond after the Big Bang, after which they would have fallen apart.

Cosmic rays could make Z(4430) particles, but powerful particle accelerators—like CERN’s enormous Large Hadron Collider in Geneva, Switzerland—are some of the only other places on Earth where they’re made. “It’s just an incredibly rare process, so where they’re really being created is in the LHC in Geneva,” Swanson says. The so-called “Large Hadron Collider beauty collaboration” recreated Z(4430) particles by smashing together protons, which are each made of three quarks.

CERN’s work resolves a once-heated debate. In 2008, the Belle Collaboration announced it saw the world’s first evidence of Z(4430) particles, in data from Japan’s KEK particle accelerator. Then another group, called BaBar, ran its own experiments in the SLAC National Accelerator Laboratory in California. BaBar said their results could be explained by something else—something that didn’t involve exotic, four-quark particles.

At a conference, Swanson nabbed Belle and BaBar scientists and asked them to explain their discrepancies. “Then I watched while they had a fight—I mean, an exchange; it was pleasant—about their relative interpretations. I have to admit I left that meeting confused,” he says. “So LHCb has come along and broken the tie.”

Not all Z particles that groups have discovered are as well-proven—with data from independent groups—as Z(4430) particles. One Z particle that’s been well documented is the Zc(3900) particle, which two labs independently announced they’d found last year.

You can read CERN’s paper about its new findings on the pre-print physics study server arXiv.

Edited April 10, 2014: A previous version of this story called the newly confirmed particle Z(4330). It is actually Z(4430). I apologize for the error. Thanks to reader Vinz for the correction!