Finding What Puts The Heat In Hot Peppers 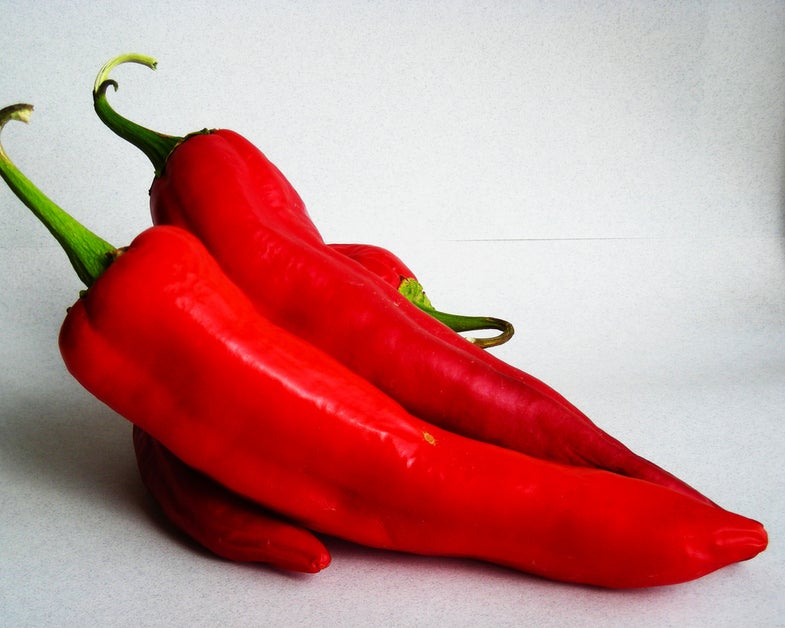 To engineer a better pepper, you’d have to go out into the field—actual fields, around the world—and look at different traits, measurements, and yield. Then, after extracting DNA from various leaves and seeds, you could painstakingly evaluate for the different traits.

On Sunday, a large (seriously, look at that list of authors) international team of scientists published the genome of the hot pepper for the first time. The information that lies within the genome could mean a more efficient plant breeding process, but it also helps reveal a few interesting secrets hiding within the pepper’s genes. Because peppers are not so different from their cousins, the potato and tomato, the genome could also elucidate more about the evolution and adaptation of other delicious species.

One of the study’s co-authors, Allen Van Deynze, has been working with peppers for about 20 years. He’s also a director of research at the University of California Davis Seed Biotechnology Center.

Van Deynze studies hot peppers, in part, because he enjoys eating them. This new genetic data reveals in more detail the titular spicy taste of the hot pepper. That the heat comes from an accumulation of capsaicinoids (which include capsaicin, dihydrocapsaicin, and nordihydrocapsaicin) was already known. But the process behind what gives peppers that trait was previously unclear. As the study says, the lack of clarity was odd, “considering the economic and cultural importance.”

The hot pepper is a popular commodity—according to the study, world production in the last decade has increased by 40%. It adds the spice to many food dishes, but it also puts the pain in defense repellants, has anti-fungal properties, and serves as nice ornamental foliage.

“We have known for quite a long time about capsaicins. We know why we can taste them and why birds can’t taste them, and we even know the gene that could turn it on and off,” Van Deynze tells Popular Science. “We just didn’t know how it was regulated.”

That gene is called capsaicin synthase. With the genome, the team of researchers learned more about capsaicin synthase, which joins two pathways—one based on fatty acids, and another one that determines color, flavor, and other traits.

Capsaicin synthase (CS) is only found in the fruit, not the seeds. So, if you—like the author, here—thought that peppers held the spice in their seeds, you would be wrong. The real hottest part of a pepper is in the white tissue that holds the seeds (known as the placenta). CS biosynthesizes the capsaisin, and the Capsicum genus is the only one that evolved to biosynthesize capsaicinoids. The study suggests that the pungency from peppers was evolved through new genes by unequal duplication of existing genes.

The study was funded by research organizations, but also quite a few agribusiness companies that hold interest in plant breeding, such as Monsanto, Syngenta, Hortigenetics, among others.