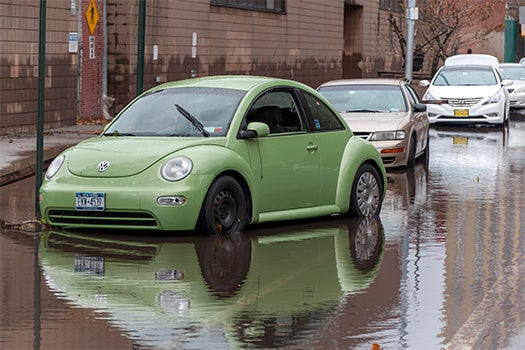 When it comes to climate change, the future is now; it no longer makes sense to (solely) talk about potential impacts in the future, since it is already having a wide range of effects in the United States, according to a large report released today by a group of scientists overseen by the government. Climate change is largely caused by humans, it has already affected you, and will affect you much more in the future, the report suggests. Here are some of the things climate change has already wrought, as the report noted:

And it gets worse:

“Climate change is not a distant threat–it is already effecting every place in the country and key sectors of the economy,” said John Holdren, President Barack Obama’s senior advisor on science and technology issues, in a conference call today. The report, part of the National Climate Assessment, was presented at the White House, and President Obama planned to spend part of the day outlining some of the findings to weather forecasters.

The data isn’t all new, but this is by far the most wide-ranging report of its kind to date in the U.S., and provides the clearest glimpse yet that humans are causing climate change, and that it has real impacts on real people–from “corn producers in Iowa” to “oyster growers in Washington State and maple syrup producers in Vermont”–along with city-dwellers throughout the U.S. In other words, you should care about this information, unless you don’t care about anything. This is the third report of its kind; the last was issued in 2009.

The most worrisome things that are already happening: sea level rise, drought and high temperatures in the Southwest (and the related issue of wildfires), and extreme downpours, said Jerry Melillo, a researcher at the Marine Biological Laboratory.

Sea level rise is a particularly thorny issue. According to the report, ocean levels will between one and four feet by 2100, Melillo said, higher than some previous estimates. Cities like Miami, where certain areas regularly flood at high tide, are already grappling with sea level rise, and plan to spend hundreds of millions in mitigation efforts.

One notable new result: Extreme downpours have increased by as much as 70 percent in the Northeast, as a warmer atmosphere is able to hold more water, said Tom Karl, director of the National Climatic Data Center.

Will this report have any effect on politics? “The Hill is challenging right now, hopefully this information will begin to change some minds up there,” Holdren said.

But by merely informing, it will hopefully help lead people to support efforts to reduce carbon emissions, and projects to mitigate some of these effects, scientists said.

This the first report to provide a comprehensive look at the effects of climate change on the U.S.–a report released in late March by the United Nations, the fifth report from the Intergovernmental Panel on Climate Change, found that climate change has already harmed hundreds of millions around the world.