The Search For Actually Useful Apps On Google Glass

Ones that make smart glasses seem cool rather than creepy 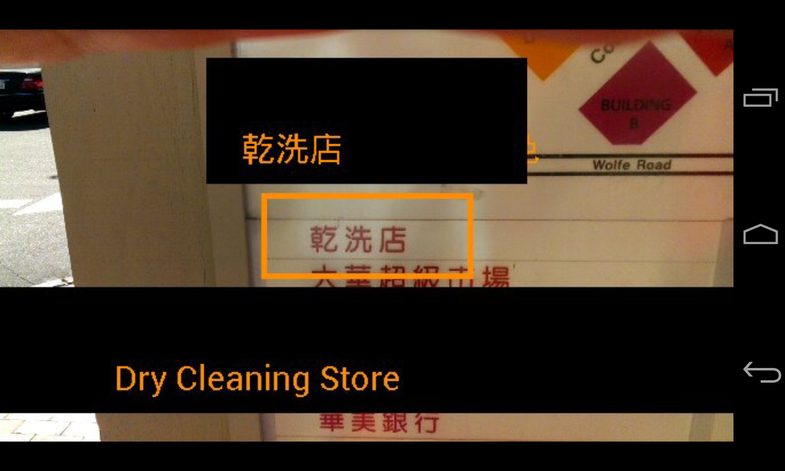 Developers able to get their hands on the $1,500 Google Glass prototypes have been hacking apps for the Android-based smart specs since this past spring – even though the company only released a Glass developer’s kit (GDK) in mid-November.

Even without the GDK, developers like Ryan Rogowski and Nathan Lord of Waygo, a language translator app with over 65,000 installations on the iPhone, have been able to use clever software workarounds to port an Android phone version of the app to the Glass platform. Rogowski and Lord showed off their prototype to me at a mini-Chinatown in Cupertino, CA. Even as a non-Chinese speaker, I was able to read some restaurant signs and the mall directory.

The app, like Glass itself, is still a work in progress. Doing the computationally intensive optical character recognition and analysis of Chinese characters in the video feed, our Glass unit ran out of power in roughly 20 minutes. Also, because there is no auto-focus feature on Glass, getting the words properly aligned for translation requires the user to bob his head to and fro, like a pigeon. Lord guesses that Google won’t add an auto-focus on future releases of the Glass camera, in order to keep costs down, and because the feature would place even higher demands on the already underwhelming battery.

The new GDK – which allows programmers to build voice and gestural control into apps, among other improvements — will allow Lord to attack the power-management problem with hacker ingenuity. For example, the new GDK will allow Lord easy access to the Glass camera to take still photos to be translated. This fix is not as cool as seeing Chinese text instantly translated as you watch the video on your screen, as in the smartphone implementations of Waygo. But the workaround will save a lot of battery life, since the Glass video camera won’t be running continuously. Still, that such a workaround is necessary is a prime example of why Lord doubts that the current battery on Glass will be able to handle really rich augmented reality apps.

In spite of this flaw, Lord thinks Glass could be a significant gateway product into a strange new world of wearable computing devices – depending on price. Users will be a lot more forgiving of imperfection if Google prices the consumer version at say, $299, rather than the $1,500 paid by early adopters.

“My opinion will have a lot to do with the price of it,” says Lord. “But Glass could turn into ‘wearable computing for the common man,’ like PCs were for the democratization of computing.”

Developers are sending new apps out into the world everyday. There are about 70 on the portal glass-apps.org, and 81 on glassappsource.com. In choosing 4 to highlight, I looked for creative use of the hands-free aspect of having a computer on your face. In other words, though a shopping assistant that reads bar codes is nice, there’s no reason you would need an expensive pair of smart glasses, rather than your smartphone, for this task. And given the hostility that “glassholes” can expect to encounter out in the world, and the likely high price of early models, there has to be a particularly convincing application of the smart eyewear platform for an app to make the cut. 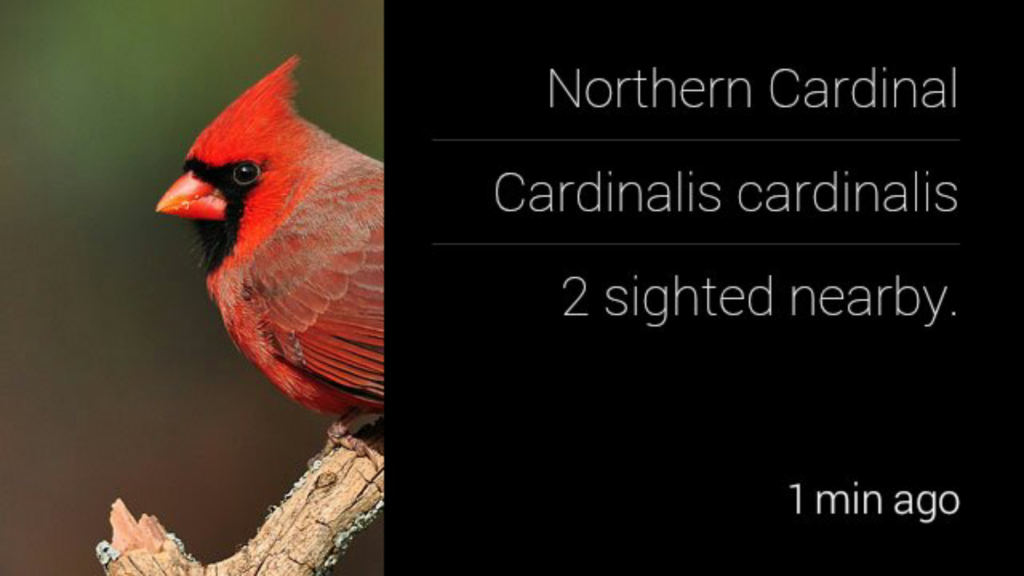 Even though technology has a reputation for distracting us from the world around us, Texas web developer Ben Nelson wanted to build an app that heightens user appreciation of nature. So he created a bird-watching app called BirdsForGlass. Based on the Glass GPS and sightings reported in an ornithology database maintained at Cornell, BirdsForGlass shows the user what birds are in the area. The app creates a “stack” of pictures of birds likely to be nearby. When you spot an interesting specimen, you can quickly look through possible candidates in the stack, seeking a match – without taking your eyes off of the real-life bird, as you would with a book. And because birdwatchers need to be silent to avoid scaring off the quarry, users control the software interface by swiping the touchpad on the right side of the Glass unit. After he finished BirdsForGlass, Nelson began working on updating the app for inclusion in a possible Glass app store. However, he found Google’s requirements so stringent, given the size of the potential user base, that he now plans to keep BirdsForGlass as an open-source project – in hopes that other tech-savvy birdwatchers will add new features.

Requiring a sequence of subtle head motions is a useful test for intoxication – and Glass uses onboard gyroscopes and accelerometers to track the position of the user’s noggin. “That’s not really possible with a phone,” says Det Ansinn, president of a software developer called BrickSimple. With his colleague Nathan Russak at a hackathon this fall, Ansinn created a sobriety app that requires users to click on 9 different virtual poker chips with a targeting sight. The poker chips are intended to make the exercise fun and engaging, but with the serious underlying purpose of determining when someone is too drunk to drive. When sober, the user creates a baseline level of performance for finding the chips. After a person has been drinking, moving the head to find the chips and line up the sight is much more difficult. If the user takes too long or is inaccurate compared with the baseline, the screen fills up with beer to inform the person that he’s inebriated. “It started out as a lark, but now we’re looking at different use cases for professionals,” says Ansinn. For example, a pilot might use Glass to assess sobriety before take-off. 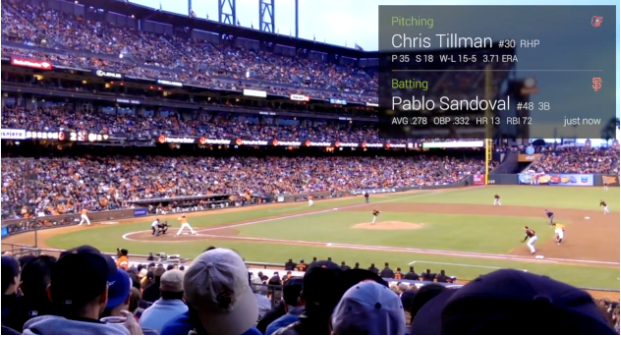 San Francisco developer–and baseball fan–Aaron Draczynski created an app that pushes play-by-play information about the game to the Glass screen in a way that feels like a genuine advance on the smartphone. He licenses the data for non-commercial use directly from Major League Baseball, with the play-by-play feed comparable to the output of the league’s own Gameday app. Because of the leisurely pace of the American Pastime, and the stats-obsessed nature of its fan base, users will probably like getting a continual description of what’s going on through Glass – after all, some fans in the ballpark already listen to radio play-by-play broadcasts, or track stats with a paper and pencil. Any limitations will be more a function of the hardware that Google ends up shipping. Currently, the battery lasts for about 3 hours of use with Blue, but games often last longer, particularly if there are extra innings. Though the glare of the summer sun could make seeing the Glass screen difficult for some fans – Draczynski says that he modified the text to be bold and comfortable to read even in bright conditions. 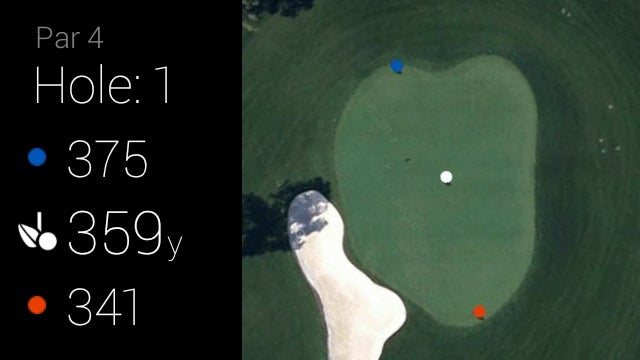 Granted special early access to the Glass Development Kit by Google, the developer SkyDroid created a particularly attractive and seamless golf rangefinder app. Called GolfSight, the app allows a user with Glass to keep score via voice command, get information on the distances to the hole, and get intel on obstacles like sand traps or water hazards. The app uses GPS info to track the user’s location, and has pre-recorded map info about the idiosyncrasies of over 25,000 courses around the world. But in a sport as crazy-making as golf, players will likely end up taking Glass on and off during a game. Having a heads-up notification that the hole is 5 yards away isn’t going to make it any easier to concentrate on that putt.
Gadgets
Google
google glass
smart glasses