DARPA’s Silicon “System On A Chip” Is Pretty

It's also a useful transmitter and power booster. 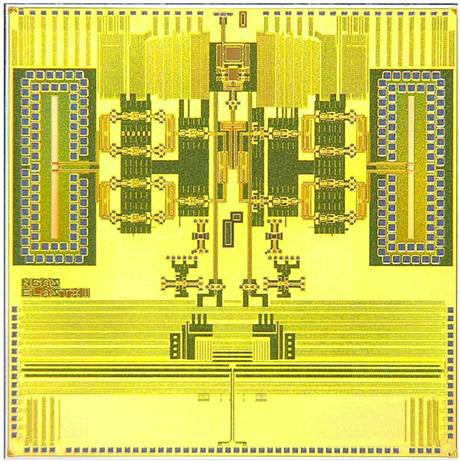 The future of silicon transmitters looks a lot like an 8-bit adventure game. Developed by DARPA, the Efficient Linearized All-Silicon Transmitter ICs (ELASTx) is a complete, all-on-one chip system that operates at 94 gigahertz. This means it transmits in the millimeter-wave frequencies, which are a relatively untapped part of the electromagnetic spectrum that’s particularly useful for radar, guidance systems, and other military tech. It’s the first time those frequencies have been achieved on a silicon-only chip, which is lighter and cheaper than the gallium-based alternatives.

Essentially, the ELASTx chip boosts the power of transmitted signals, to deliver large amounts of data at fast speeds. Satellites, especially, could take advantage of this breakthrough because of its high power and miniscule weight. The transmitter can also change the frequencies it uses, so it can communicate across different types of waves.