A Full-Metal Dress for Electric Exhibitions 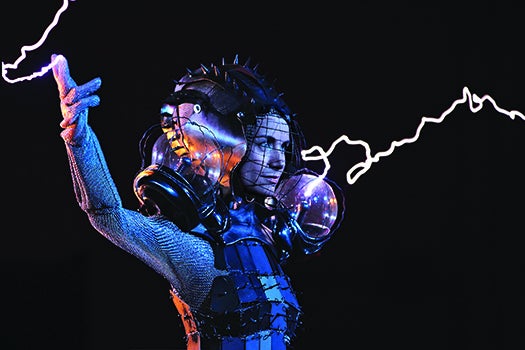 Dutch designer Anouk Wipprecht has taken fashion to a shocking new level: She recently donned a custom-built metallic dress and zapped herself with nearly half a million volts of electricity. The stunt came about when she met ArcAttack, a band that makes music with giant Tesla coils. Together they decided to craft a shockproof costume for an upcoming show. Wipprecht built a spiked helmet and plate-metal dress and secured them over a head-to-toe suit of chain mail. For extra flair, she hacked toy plasma balls into shoulder ornaments. “Normally I work with fashion models,” Wipprecht says. “But this time, nobody else wanted to wear it.” When she walked between Arc-Attack’s Tesla coils at Maker Faire this May, Wipprecht remained unscathed. Her garment safely conducted the coils’ electrical bursts around her body and into the ground while lighting up her shoulders with tendrils of purple plasma.

600: Approximate number of metal rings that link together the aluminum plates of Wipprecht’s dress