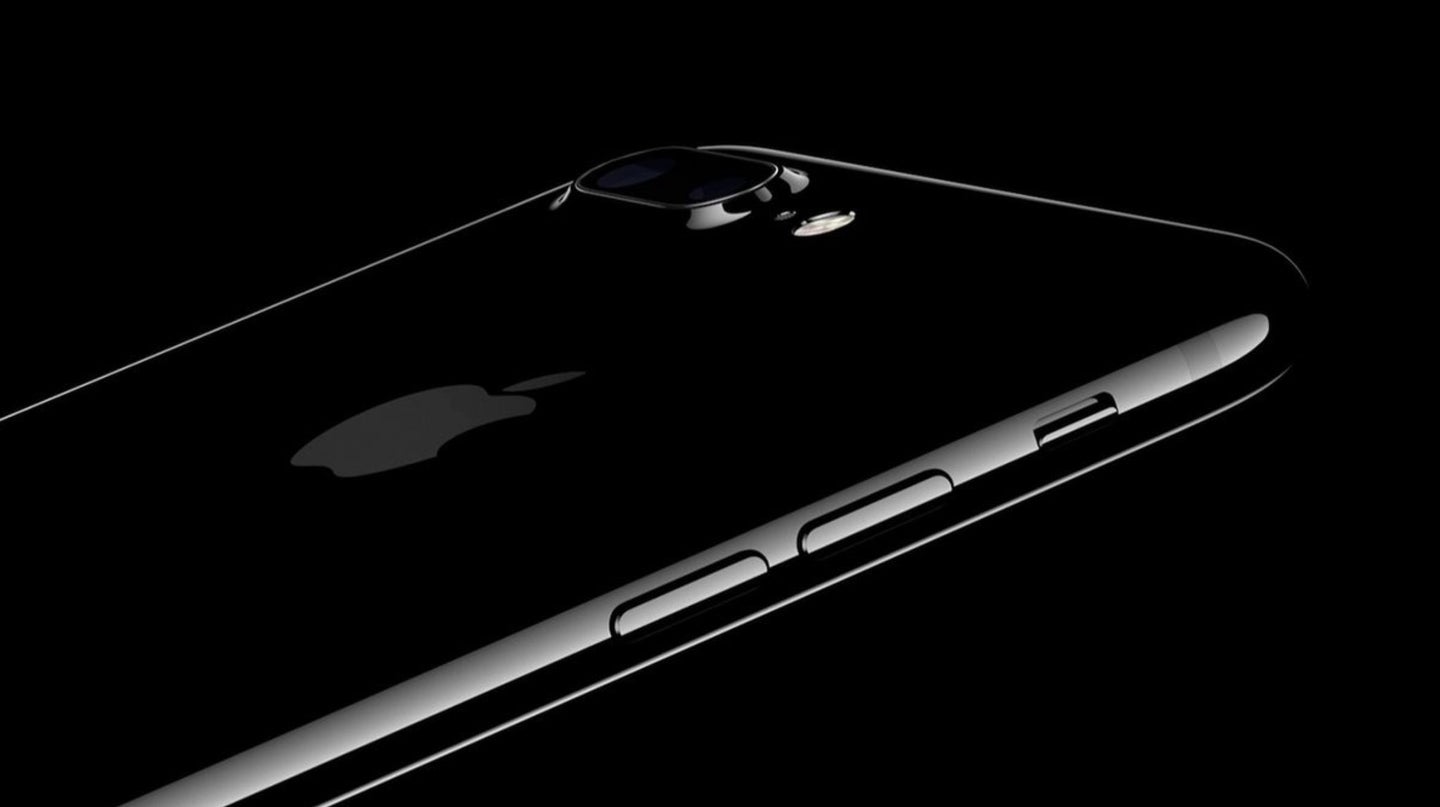 Apple unveils the iPhone 7 on stage in California. Apple
SHARE

Apple lifted the veil off the new iPhone 7 today at its fall event in San Francisco. The device, which leaked early on Twitter, will feature a 12-megapixel camera and jet black design with stainless steel Apple symbol.

The iPhone will come in five colors, Silver/White, Gold/White Rose Gold, “Black” and “Jet Black.” The iPhone 7’s home button will be a force-sensitive home button, moving away from one that users can physically press. The new home button is reminiscent of Force Touch and 3D Touch on previous Apple devices.

And after years of complaints from tech writers, Apple is finally getting rid of the 16 GB model as the base amount of storage for the iPhone. Now, the entry level iPhone 7 will come with a 32 GB solid state drive, which means double the capacity to hold your data, apps, games, photos, videos, texts, etc.

Apple placed on emphasis on further improving the camera this year. The rear-shooter on both sized iPhone 7’s will see optical image stabilization. Similar to what we’ve seen on the iPhone 6 Plus, more stable photos will arrive to the iPhone in a lens that physically moves in its housing to help with the movement of users’ hands.

For Live Photos, Apple will now allow you to edit Live Photos, just like regular images. Along with JPG files, the iPhone will support RAW file format images. The front camera will now be seven megapixels, instead of five.

The iPhone 7 Plus will get a second camera lens. One lens is wide angle while the other is telephoto. In the iOS camera app, you’ll be able to tap the 1X button to 2X to use the telephoto lens to make use of optical zoom. The iPhone 7 will allow up to 10X zoom in total when combining optical with digital. The iPhone 7 will also use hardware of the 7 Plus and software to improve the depth of field abilities of the iPhone. The depth of field software will make its way to iPhone 7 Plus users later this year.

The taptic engine comes to the home button

The iPhone 7 has been revealed

Apple also announced the death of the standard headphone jack in its new smartphone. Apple is shipping the iPhone 7 with Lightning-supported first-party earbuds, as well as a Lightning-to-3.5mm headphone jack adapter.

Along with new headphones that will come with the new iPhone, the company also announced new, separate wireless earbuds called the Apple AirPods.

The updated earbud headphones will be two tiny little nubs without any cords whatsoever.

They’re also packed with technology, including a new “W1” microchip which Apple notes is its first chip designed specifically for connecting wireless devices quickly and reliably.

The Airpods will automatically nudge nearby Apple devices to pair once their case, which doubles as a battery housing, is opened for the first time. Furthermore, one the end of the earbuds are microphones that allow you to use Siri without a screen.

Unlike your old, lower tech earbuds, these puppies will have to be charged after 5 hours of use. The case itself provides 24 hours of charging power, according to Apple. And once that’s all spent, you’ll charge the case itself over — what else? — an Apple lightning cable.

As mentioned previously, the AirPods are sold separately and will ring up to a pricey $159.

The iPhone 7 itself starts at $649 off-contract for a 32 GB model, with prices going up from there for larger storage and the larger-screen Plus models.

You can pre-order the iPhone 7 and iPhone 7 Plus online beginning September 9, and it will be available in stores on September 16.