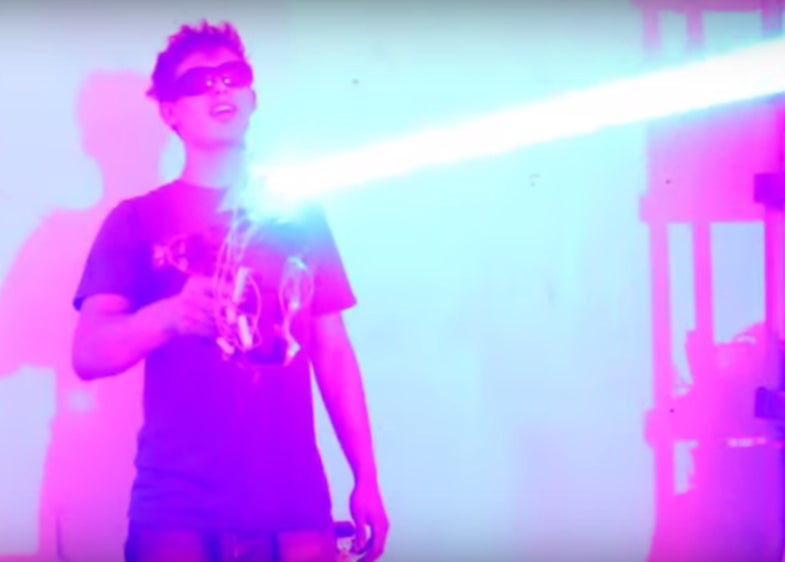 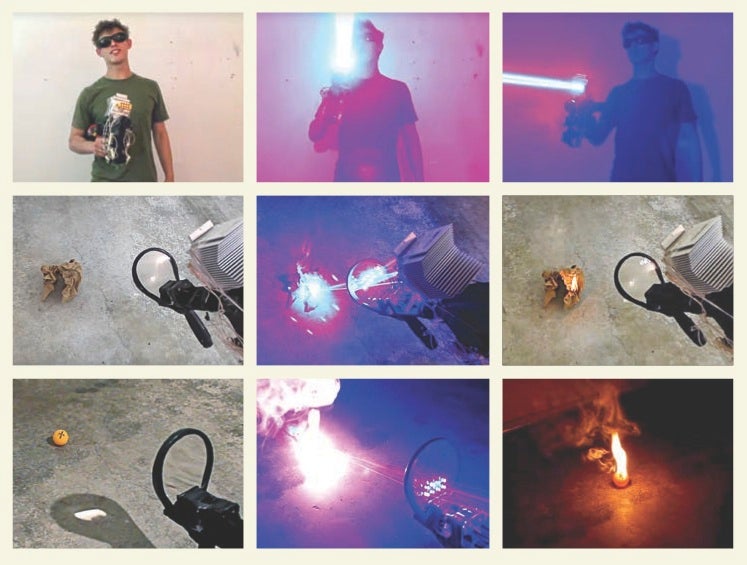 Drake Anthony demonstrates his 40-watt laser shotgun in stills taken from a video on his YouTube channel.

There’s no practical reason why a 40-watt laser shotgun should exist. But it’s not illegal, or—with the appropriate vision and know-how—even that difficult to build. So this past June, DIY laser whiz Drake Anthony, then a college junior, decided to give it a go.

Rather than craft a laser gun composed of a single, highly powerful beam, Anthony’s creation combines eight parallel 5-watt lasers. A lens focuses the beams to produce a concentrated blast of photons—just as a shotgun’s choke does for pellets.

Clearing time from his schedule at Southern Illinois University, the math-physics-chemistry triple major worked nearly nonstop for 48 hours, stripping wires, soldering parts, and smoothing out bugs, taking breaks only to eat and sleep. His efforts paid off. Anthony emerged from his marathon with a weapon capable of setting paper on fire, melting Ping-Pong balls, and burning wood.

“It’s something I wanted to build just because I could,” he says. “It’s very, very strong and extremely dangerous, but once I realized it was possible to make it, I had to try.”

Anthony—better known to his 155,000 YouTube followers by his username, styropyro—has been hacking lasers since he was 12 years old. Now 23, the 40-watt shotgun is only his latest creation—and the most powerful to date—in a list of more than 100 homemade lasers. Many of those DIY projects are chronicled on his YouTube channel, which contains around 150 demonstrations, and step-by-step instructions for making devices ranging from a laser lightsaber to a laser lava lamp. Some videos have received millions of views, including the 40-watt laser shotgun, which racked up more than 5 million clicks in just a week.

Anthony, who grew up in the tiny town of Goodfield, Illinois, can’t remember a time when he wasn’t interested in science, especially all things chemistry- and pyrotechnics-related. But it wasn’t until junior high that he first learned about lasers and the way those amplified beams of light can set things on fire—even with just a few watts. Just as a magnifying glass does with sunlight, lasers precisely focus monochromatic, synchronized light waves into a small spot, resulting in a high-energy density. As the laser’s concentrated light is absorbed into the material, it is converted into heat, enough of which will cause a fire.

Eager to move beyond bland textbook explanations, the young experimentalist ordered a green laser pointer online. As soon as it arrived, he ripped it apart—and promptly broke it. “But then I bought another one and modified it so it was stronger,” he says. “And that one didn’t break.”

“As I was breaking things and putting parts back together, I was learning from experience.”

Anthony was hooked. He began placing bids for broken laser pointers and DVD burners on eBay, which he would dismantle. Like Dr. Frankenstein, he cobbled the disparate parts together to fashion a stronger, more potent creation. “I didn’t know any real physics at the time, and a lot of it was just screwing around,” he says. “But as I was breaking things and putting parts back together, I was learning from experience.”

Anthony posted his first laser video in 2007, a “really simple, really quick” clip of a green laser pointer that he used to pop a few balloons. What began as a desire to share his creations with a few fellow laser enthusiasts soon became much more. “I had no expectation of getting a lot of views,” he says. “I thought there would just be a niche market of people who thought the videos were interesting.”

To his surprise, Anthony steadily attracted a following of devoted subscribers, and some of his videos—including a how-to explanation of a laser he built almost entirely from old computer parts, and a comparison of the pros and cons of blue and green lasers—proved to be wildly popular. The attention eventually landed him a deal with YouTube.

Warning: Anthony’s laser projects can be very dangerous. So don’t try this at home—you’ll scorch your eye out.

While the YouTube channel helps him pay his college bills, Anthony says he’s not in it for the money. For him, it’s all about the love of tinkering. “Lasers are really just one of many scientific hobbies I have,” he says. “If I didn’t do projects like these, I’d be miserable—it’s just the way I am.”

Setting things on fire with homemade lasers is not his life’s mission, however—research is. The lasers have assisted him in that pursuit too; he credits the videos for helping him score a job in a physical chemistry lab at his university, where he uses lasers to try to make MRI instruments more sensitive. Now that he’s a senior, Anthony is debating what to do for his life’s work. He does want it to have direct application for helping people. That, and it has to be crazy. “Like, ridiculous, high energy—just crazy!” he says. “So there’s a good chance that lasers might be involved.”

A shorter version of this article originally appeared in the October 2015 issue of Popular Science, under the title, “A Laser Shotgun. Really.”