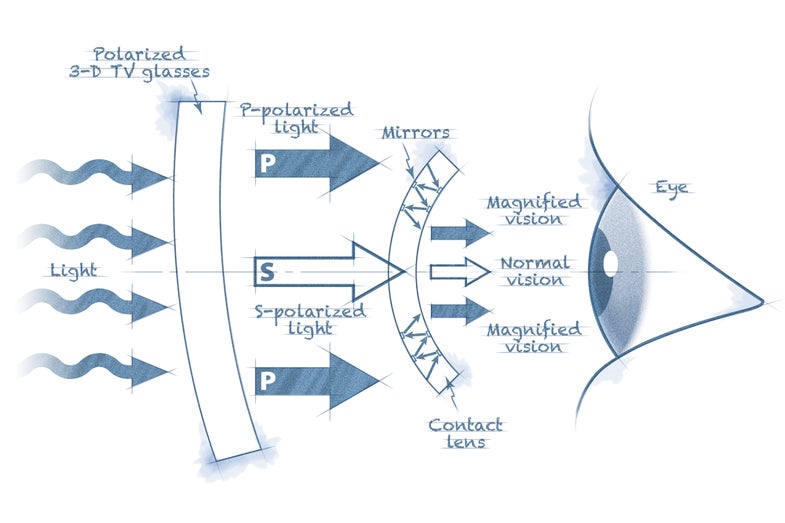 What is it? A real contact lens that can switch between magnifying an image and standard vision. it could be useful for both military personnel and patients with retinal diseases.

We built a telescope into a contact lens. It is similar to a hard contact lens, but embedded inside are four tiny aluminum mirrors. These mirrors magnify the light, like a telescope, making images appear 2.8 times bigger.

You can switch between magnified and normal vision by wearing modified 3-D television glasses. A button on the glasses changes their polarization. And polarized filters on the contact lenses determine whether the light passes through their magnifying part or their non-magnifying part.

DARPA, a funder of our research, is interested in super vision. But the lenses may also work for people with macular degeneration, a disease that degrades the central part of the retina. Magnification makes it easier for those people to decipher small things, like text, with the healthy areas of their eyes.

The lenses are about 10 times the thickness of normal contacts. We’re planning a clinical trial at the end of the year to see if they’re comfortable. I’ll volunteer if I can. I really want to see what they’re like.

Eric Tremblay is a researcher at the École Polytechnique Fédérale de Lausanne in Switzerland.