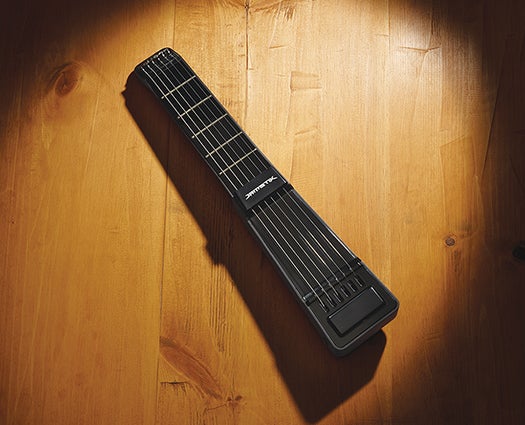 As a kid, electrical engineer Dan Sullivan mastered the guitar. His teenage sons, however, prefer mastering videogames. With a realistic instrument, Sullivan thought, all the time devoted to games like Rock Band could produce impressive musical proficiency. “You can show off playing guitar when you’re my age,” says Sullivan, now 58. “Being able to beat level 17 isn’t going to stay with you.”

Seven years ago, Sullivan left his cushy CTO job at a video-advertising company to develop JamStik, a digital six-string guitar. The compact neck has frets and strings like a real guitar but requires no tuning and doesn’t rely on push buttons like many digital models. Instead, small sensors embedded in the fret board track fingers illuminated by 52 infrared LEDs.

Because the sensors are spaced just a fraction of an inch apart, firmware interpolates the data to filter overlapping signals and determine the precise placement of each finger. They can also trace the bending of a note for a bluesy tone or quivering fingertips for a dramatic vibrato. An onboard microprocessor converts the raw data into standardized musical instructions (MIDI), which a wireless antenna beams to a synced iPad or laptop.

With a half-inch range of sensitivity above the fret board, the sensors detect fingertips before they touch a string. This enables companion software, such as JamTutor for the iPad, to map hand positions in real time so that players can correct themselves. JamStik also works with more than 100 Wi-Fi–enabled apps, including Garage Band. Sullivan hopes the instrument, slated to reach stores by the end of 2013, will do for the guitar what keyboards did for the piano. “Our hope is to help introduce a new generation to the pleasure of creating music,” Sullivan says, “rather than just being passive consumers of it.”