A household lamp powered by a bag of rocks. 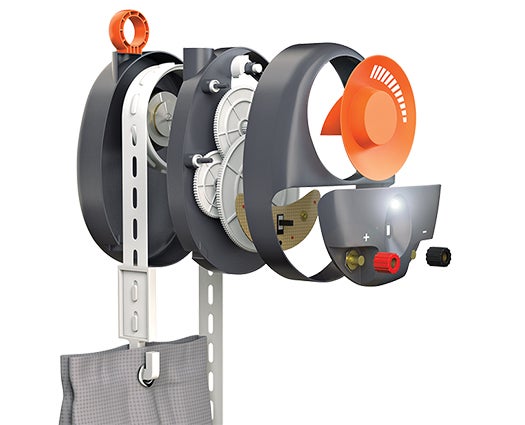 More than 780 million people rely on kerosene to light their homes. But the fuel is pricey and is toxic when burned—not to mention a fire hazard. In 2008, London-based product designer Martin Riddiford and his colleague Jim Reeves decided to create a cheap, safe alternative.

Riddiford knew a falling weight could produce enough energy to run a grandfather clock, so why not a light? To find out, he attached the crank of a wind-up flashlight to a bicycle wheel. He hung a weight from the wheel to cause it to spin; the wheel cranked the flashlight, and the device lit up.

Over the next four years, Riddiford, Reeves, and a small team spent their downtime between projects in a basement, refining the GravityLight. To use it, a person hangs the device and fills an attached fabric bag with up to 28 pounds of rocks, dirt, or other material. Lifting and releasing the bag steadily pulls a notched belt through GravityLight’s plastic hub; the belt spins a series of gears to drive a small motor, which continuously powers an LED for about 30 minutes.

The team used crowdfunding to manufacture 1,000 GravityLights, which it plans to send to developing countries for field testing—plus 6,000 more for backers. “It’s exciting to witness so much positive reaction to what we’re doing,” Riddiford says. Besides remote villages, the lamp could prove handy in campsites, closets, and any dark nook far from a socket, so Riddiford also hopes to license a retail version for less than $10.

1) As a weighted bag descends, it tugs a belt to turn a series of plastic gears.
2) The gears work in unison to spin an electric motor.
3) The motor powers a small yet bright LED, providing continuous illumination for about 30 minutes—the maximum amount of time that the bag can take to descend.
4) External connectors can power low-voltage devices, and the entire system is designed to work for thousands of lift-and-drop cycles.