How 3-D Printing Will Turn Homes Into Mini Factories

Consumer-grade multi-material printers could hit the market in the next decade. Here's why that matters. 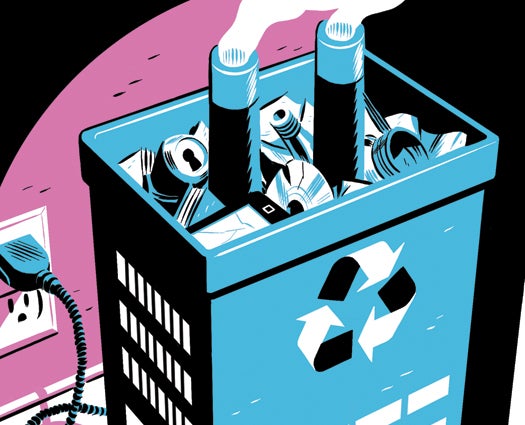 In 1984, inventor Charles Hull built the first rapid-prototyping machine, a massive device that turned digital blueprints into plastic models constructed layer by ultrathin layer. Since then, 3-D printers have shrunk from room-filling behemoths to tabletop boxes just larger than a typical ink jet. They have also dropped in cost from hundreds of thousands of dollars to as little as $500. Home printing has flowered as a result, with amateurs “fabbing” anything in plastic, from cellphone cases to scale models of Rodin’s Walking Man. Yet such tinkering, however nifty, is simply 3-D printing’s first act. Its real promise is much greater: to turn every home into a self-sustaining manufacturing and recycling center.

The changes that will enable this tranformation are happening already. Presently, home printers fab in plastic, as Hull’s machine did. But industrial printers have evolved to print a multitude of materials, from glass to stone. Printer maker Objet has released the Connex500, a $250,000 printer that works in 14 polymers at once.

Researchers at the Cornell University Creative Machines Lab recently developed a machine that they used to print components vital to working electronics, as well as a functioning electromagnet and battery. Home printers are poised to follow a similar development curve. Hod Lipson, the Creative Machines Lab director, says consumer-grade multi-material printers are less than a decade away.

Rather than fab a plastic lamp shade, makers will print the components of the entire lamp.Just as the capability of printers is growing, so is the ecosystem of 3-D designs and design tools, making it easier and easier to print at home. At Thingiverse, makers can scour a database of thousands of downloadable designs. Autodesk design software converts digital snapshots of real-life objects into 3-D patterns. And Adobe is developing a program that evaluates designs for structural flaws before they are printed.

Alone, such advancements will turn home printing from a novelty to a necessity. (Rather than fab a plastic lamp shade, makers will print the components of the entire lamp, wiring, plug, and all.) But truly transformative change will come from another industry: recycling. Beginning in the 1970s, machines at recycling centers have ground discarded plastic into raw material that companies use to make everything from toys to carpeting.

Similar processes exist for metal and glass. In January, Tyler McNaney, a student at Vermont Technical College, debuted the Filabot, a machine that repurposes plastic at home. The tabletop device grinds and melts most recyclable plastic into the raw filament used in 3-D printers. If devices like Filabot succeed, makers will not only produce new objects in their workshops, but also repurpose old ones.