Along with annoyingly adhering to your TV screen and tabletops, dust can be a deadly material, exploding with enormously destructive... 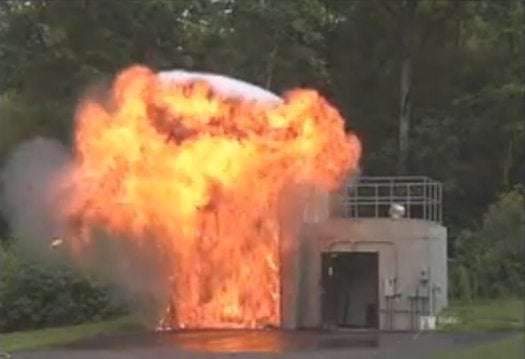 Along with annoyingly adhering to your TV screen and tabletops, dust can be a deadly material, exploding with enormously destructive force in places like coal mines, sugar refineries and grain silos. The explosive properties of normal dust are pretty well known, but what about non-traditional dust? Not all dusts are created equal — and dust derived from the materials of the future could present a very different type of danger.

Led by S. Morgan Worsfold of Dalhousie University in Halifax, a team of researchers from Canada and Norway set out to determine these properties. They surveyed the fairly small body of published research on blowing up nanoparticles, flocculent materials — fluffy synthetic stuff — and hybrid dust mixtures, which they define as any dust with an added liquid or gas.

Dust is defined as a teeny solid less than 420 microns in diameter, but that does not cover the nanoscale world. Nanodust, and its potential explosive properties, is relatively under-studied. A general rule of thumb in the world of dust research holds that the smaller the particle size and the greater its surface area, the more explosive it is. Nanoparticles are tiny, but have a large relative surface area because of the way atoms are arranged in them. They also tend to want to clump together, and this is one of the properties that makes items like carbon nanotubes and graphene so interesting to study. But these large agglomerations of nanoparticles, called nanpowders, are also pretty explosive, igniting with just 1 millijoule of energy. They could ignite with a spark, a collision or mere friction, according to Worsfold and colleagues. And because they’re so small, nanoparticles can remain suspended in the air for days or weeks and you would never know it.

Then there’s flocculent dust, which is made of fibers and has a non-spherical shape, and is derived from all the synthetic materials in our homes, like polyesters, acrylics and nylons. These materials don’t fall under the normal definition of dust, but they are dangerous all the same, the researchers say — flocculent materials are often manufactured using electrostatics, so they could ignite if something goes wrong. Hybrid mixtures could be any type of dust particle with a liquid or gas, so those are more variable.

The researchers say much more study is needed to understand the explosivity of these different dusts, especially nanodust, as nanotechnology grows ever more prevalent. Their paper appears in the journal Industrial & Engineering Chemistry Research.