De-miners on the hunt for unexploded land mines could get some help from a simple smartphone app that works with... 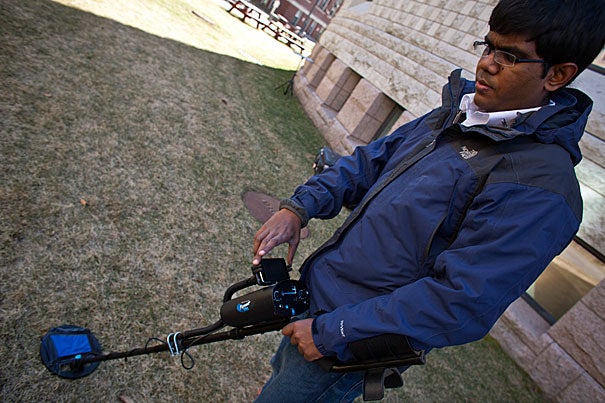 De-miners on the hunt for unexploded land mines could get some help from a simple smartphone app that works with their metal detectors.

Students at Harvard University, working with researchers at Carnegie Mellon University and MIT, designed a system called “pattern enhancement tool for assisting land mine sensing” (PETALS). It visualizes the outline of a buried land mine according to the metal detector’s feedback.

De-miners use a sweeping motion to cover the ground where a land mine might be buried. Their metal detectors beep as they move across the ground, and trained minesweepers can make out a mine’s shape and position underground according to the pattern of the beeps.

The PETALS system takes this a step further, drawing an outline of the mine’s shape in accordance with the pattern. The system shows one red dot for every beep of the metal detector, giving an increasingly detailed picture of what lies beneath.

It takes the minesweepers’ visualizations out of their heads and onto a map, according to a story published by the Harvard Gazette news service.

PETALS doesn’t require de-miners to change their tactics at all, and it’s a simple augmentation in areas with limited resources, where many land mines can still be found. It could even help train new minesweepers, according to the Gazette — in tests, newbies performed 80 percent better with the visualization than those who did not use it.

More than 110 million land mines of various types remain hidden around the world, according to UNICEF. Afghanistan, Angola and Cambodia have suffered 85 percent of the world’s land-mine casualties.

The PETALS system just requires a smartphone mounted to a metal detector, according to Lahiru Jayatilaka, a researcher at Harvard’s School of Engineering and Applied Sciences.

“Improving the de-miner rather than the equipment is a novel way to think about land mine removal technology,” he said.