Amazing Video: A Water Droplet Skitters In A Super-Hot Pan at 3,000fps

It’s called the Leidenfrost effect, and you’ve seen it before: dribble a little water onto the surface of a hot,... 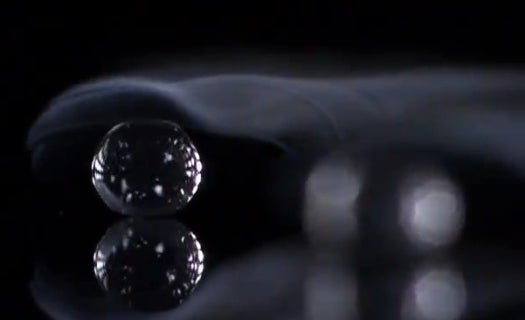 It’s called the Leidenfrost effect, and you’ve seen it before: dribble a little water onto the surface of a hot, dry pan, and the water forms little drops that skate around until they fizzle out.

But have you seen it filmed close-up at 3,000 frames per second? Thanks to Nathan Myhrvold and his Modernist Cuisine team (whom we’re going out to visit in Seattle this week!), now you can.

Instead of boiling away instantly, if the skillet’s hot enough the water is insulated by a thin layer of its own vapor, and skitters pleasingly.

Stay tuned for our up-close look inside Modernist Cuisine, the self-published 2,438-page science- and tech-fueled megacookbook to be published this March, after which we will finally finally let out our breaths.