The rapidly aging population of the United States as the Baby Boomers reach their golden years doesn’t bode well for... 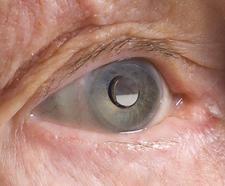 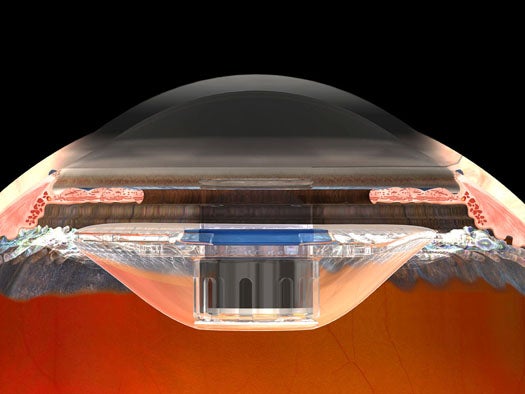 The rapidly aging population of the United States as the Baby Boomers reach their golden years doesn’t bode well for our collective vision: 30 percent of Americans over age 75 suffer from age-related macular degeneration (AMD), a common condition that causes the retina to degrade and decay, resulting in partial blindness. But after five years of deliberation, the FDA has approved the first implantable miniature telescope (IMT) that fits directly into the eye to correct the effects of AMD.

Those effects are pretty serious; as the retina degenerates, the center part of a person’s vision grows blurry or completely dark. The IMT corrects this by expanding an incoming image onto the peripheral parts of the retina that are still in good health. Once implanted directly into the cornea, the device makes use of the remaining working retina cells to produce a donut-like image that users can see.

Of course, that donut-like image isn’t anything like our natural vision. Users have to go through a rehabilitation process to learn to see with their new eye, and even if a person has AMD in both eyes (most do) the IMT can only be implanted in one eye so the other can still provide peripheral vision. This kind of altered eyesight is likely headache-inducing, and may not work well for all candidates because of the intensity of the rehab process.

Further, the IMT is by no means a cure-all for all AMD. It is designed to treat a specific form of AMD known as “end-stage” (that’s right, it’s the more advanced stage of the condition), a kind of AMD that affects about 500,000 Americans. However, though far from a panacea, it is available right now and in two-thirds of trial cases the IMT has significantly improved vision, and by extension quality of life, in patients.

That’s a pretty big deal, considering end-stage AMD is expected to affect more than a million patients by 2050. By then we’ll all be cyborgs anyhow, but in the meantime the IMT should serve as a dependable technology that will keep more of the population in at least serviceable vision for longer.