Charles C. Della Santina has unusual patients: disoriented chinchillas. As with many of the 4.5 million people who suffer from... 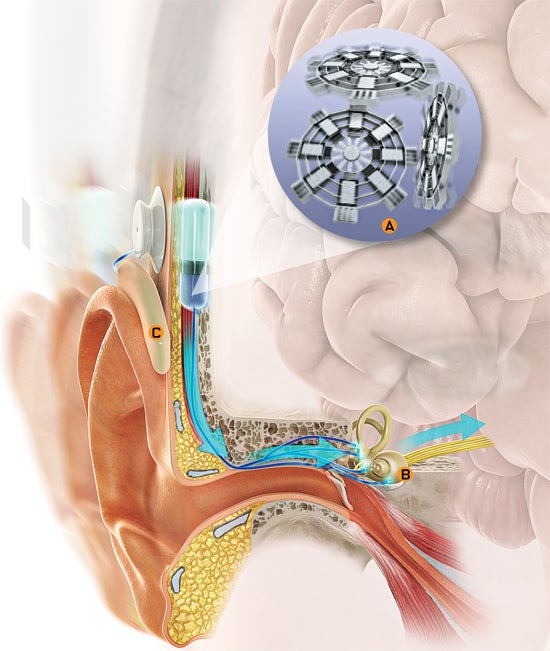 Charles C. Della Santina has unusual patients: disoriented chinchillas. As with many of the 4.5 million people who suffer from chronic imbalance, a damaged ear makes it nearly impossible for the animals to stand upright. This makes them perfect test subjects for a prosthetic inner ear.

The device, developed by Della Santina, an ear, nose and throat doctor at Johns Hopkins University, connects small gyroscopes and accelerometers to the brain to do the job of the inner ear.

Usually when you move your head, fluid in three inner-ear canals swishes around, bending the hairlike cells that line the canals. The cells tell your brain which direction they’re flexing, which your brain uses to determine the direction you moved. Your brain then prevents you from getting dizzy and falling over, by, say, keeping your eyes focused straight ahead while you’re jogging. People whose cells have been damaged by head injuries, aging or certain strong antibiotics, however, can end up with chronic imbalance, a condition that affects 250,000 Americans.

Della Santina has shown that his externally worn prototype works when wired to chinchillas with dead inner-ear-hair cells. The prosthetic interprets head motion the way a Nintendo Wiimote does and sends that data to the brain. Before his intervention, the chinchillas ran in circles trying to find their balance, but right after, they started scurrying around almost like normal. And he’s now seeing good results with monkeys, too. Della Santina is shrinking the sensors by 20 percent so that they can fit under the skin and hopes to start clinical trials as soon as 2013. People are already lining up to volunteer. “I can’t work anymore, and I had to sell my beach house,” says a patient, Richard Gannon. “I used to stumble on the sand and people would pull their kids away, thinking I was drunk. I can’t wait to get the implant.”