With the Olympics drawing to a close, I just realized something–we didn’t see any speed skiing at these games. Or... 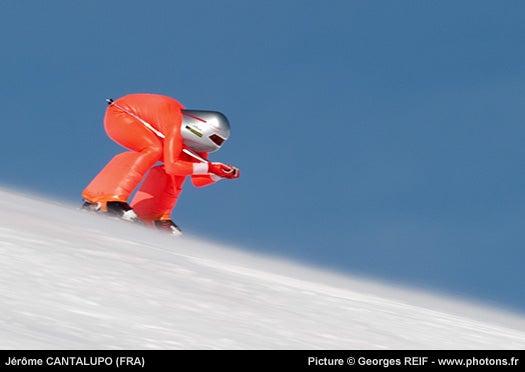 With the Olympics drawing to a close, I just realized something–we didn’t see any speed skiing at these games. Or the games before them. In fact, we haven’t seen speed skiing’s extreme take on the old go-down-a-hill-on-wooden-planks tradition since 1992 in Albertville, France, when for a brief moment we were all exposed to the sport’s intense weirdness. As a ten year old kid watching those games, I loved it.

This lack of speed skiing makes me sad for a few reasons.

First and foremost, it’s the world’s fastest non-motorized sport. The current men’s speed skiing record is an incredible 156.2 miles per hour, set by Italian Simone Origone in 2006, which is the fastest any human has ever gone on land without a motor. To put that speed into perspective, terminal velocity for a skydiving human–the rate at which it’s impossible to fall any faster–is typically around 120 mph.

If the Olympics are truly about going harder, faster and further, it doesn’t make much sense to exclude the fastest sport on Earth.

Second is the gear. It’s designed to turn a skier speeding down a hill into an aerodynamic missile: helmets are custom made, honed in a wind tunnel, and they’re beautiful; the suits are rubberized polyurethane-coated polypropylene, essentially a skin-tight Ziploc bag for your body, because the tiny pores in more breathable materials like Gore Tex catch the wind and slow you down; skis can measure up to eight feet long, and are too big to do anything but go straight down a hill; wide foam fairings fit behind the skiers calves, which are another aerodynamic touch to prevent a dangerously destabilizing vortex of air from swirling in a skier’s wake; even the handles of the ski poles are crafted to fit into the aerodynamic profile of a perfect tuck. 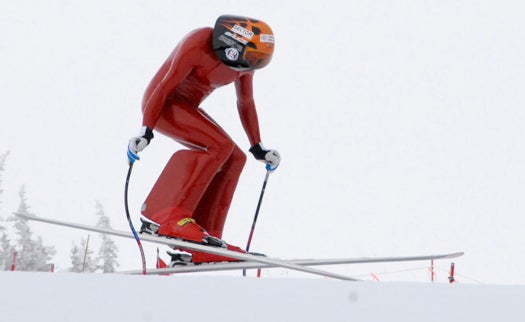 What Nice Fairings You Have

All of this has the wonderful side effect of making speed skiers look like they’re from another planet, or at least the future.

So why no speed skiing in Vancouver? Well, for one, it takes a specialized course with a straight, smooth downhill slope and an extended runoff area. The ’92 games in Albertville, which featured speed skiing’s only Olympic appearance (as a demonstration sport) happened to be right nearby Les Arcs, which is considered the best speed skiing venue in the world and is where most of the world records are set. A few other venues dot Europe, but in North America, there are only a handful.

Coincidentally enough, one of those rare North American venues, Sun Peaks, happens to be just four hours from Vancouver–about twice as far as Whistler, where the ski events were held this year, but still in the neighborhood. As a matter of fact, Sun Peaks is hosting a speed skiing event next weekend, immediately after the games close. So if you’ve left Whistler feeling like a 70 mph Lindsey Vonn downhill run just isn’t fast enough, stick around.

If it’s not the venue, what, then, is preventing such an inherently awesome sport from gracing our televisions once every four years? Its relative obscurity? Surely it’s no more obscure than, say, four man bobsleigh. The equipment is expensive, which is a barrier to entry. And then, of course, there’s the danger. As we learned tragically this year, a death in an inherently dangerous Olympic sport is still a rare shock, and speed skiing certainly raises the overall risk factor of the games.

But as someone who loves superlatives of human speed and a good aerodynamic helmet, I hope the world’s fastest non-motorized sport can make it back into Olympic glory. Sochi, you have four years to start building your speed skiing slope–please get to work.