Tasers May Be Deadly, Study Finds

That’s bad news since police are over-using them 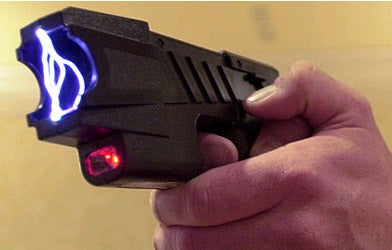 Tasers, weapons that fire electrodes to shock and debilitate assailants, are used in more than 100 countries and by 500,000 law enforcement agents in the United States alone. They are touted as a safe way to incapacitate suspects who are aggressively resisting arrest, obviating the need for police officers to use brute force. But Tasers may not be so safe, after all—new evidence shows that they may lead to fatal cardiac events, according to a report published today in the British Medical Journal. That’s especially chilling because reports in recent years show that police are deploying the weapons too frequently, putting people’s lives in danger.

Most of the tests conducted on Tasers have been on the X26 model, the one that is most common among law enforcement agents; it can reach a suspect from 35 feet away. Some of the risks associated with Tasers have been well documented; the shocks can induce seizures, collapse lungs, cause skin burns or eye damage, and result in injuries to muscles, joints or tendons. Unsurprisingly, the biggest issues result from suspects’ uncontrolled falls, which can result in head injuries and death—Amnesty International says that Tasers have caused 490 deaths between 1990 and 2012, according to the Chicago Tribune.

But the science has been less clear on Tasers’ possibly lethal effects on the heart. Extended shocks have led to issues with hearts’ rhythm, specifically arrhythmias and ventricular fibrillation, or rapidly accelerating heartbeat. And though there have been some safety tests, many haven’t addressed these conditions in settings that could mimic the real world. This might be because the weapon’s manufacturer commissions many of the safety studies, as the BMJ report notes, so they may not be as objective as they should. In the past few years, the manufacturer has come under fire for failing to properly warn officers of the consequences of deploying Tasers for too long and recently lost a lawsuit when a 17-year-old suspect died of ventricular fibrillation after being tased for 37 seconds.

These questionable and dangerous health consequences probably aren’t enough to convince law enforcement agencies to stop using Tasers altogether—they can be useful tools if properly deployed. But they should at least be enough to warrant a reform on how officers are trained so that they use the weapons more sparingly and responsibly. That reform is long overdue anyway; a 2011 report from the U.S. Justice Department determined that officers use Tasers too frequently and inappropriately, often on patients who are mentally ill. So while the BMJ report indicates that Tasers can be lethal, these reports show that it’s not the weapon itself that is the main problem, it’s how the weapon is being used.