Reconstructing the past with primordial goo 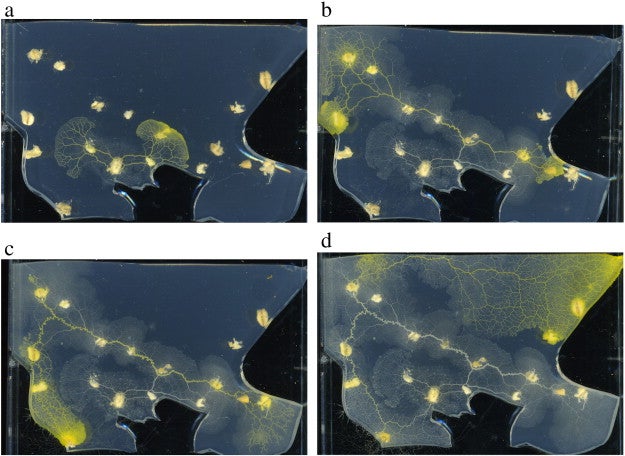 How do you reconstruct a civilization’s history when it has been literally trampled underfoot? Some of Rome’s roads through the Balkans are largely forgotten, others still in use, and others we only know about because of documents from travelers explaining a route that matches ruined Roman distance markers. Hoping to get a better grasp of how these road networks worked in the Balkans between the 1st century BC and 4th century AD, researchers turned to an unlikely research assistant: slime mold. Published in The Journal of Archaeological Science: Reports, a new study details how “slime mould imitates development” of these roads, by figuring out the most efficient way to travel between cities. That is, if the cities were made of yummy treats.

Slime molds are a natural choice for studying transportation networks. Searching for nourishment, slime molds extend tendrils outwards and then migrate to large food sources. When placed on a map of the United States with oatmeal clusters indicating large cities (slime molds love oatmeal), a mold plotted out an alternate inter-urban transport network. For the research team headed by Vasilis Evangelidis and comprising members from both Greece and the United Kingdom, a slime mold placed onto a map of the Balkans ate its way into recreating a Roman network of military roads.

Using a map of the Balkans made of agar gel, the researchers placed oat flakes in the locations of 17 major Roman cities. The mold was placed initially on the oat flake for Thessaloniki, a city in the northern Aegean region that was a major urban center at the time (and still the second-largest city in Greece today). The researchers ran the experiment 18 times, with the mold starting its spread from Thessaloniki for each run. The molds recreated with remarkable accuracy a network of roads similar to that used by the ancient Romans, even tracing out paths of relatively unknown and obscure roads like the West-Pontian road traveling northeast though the Balkans.

In the future, researchers hope that projects like this can assist with archaeological research, as another way to gain insight into human behaviors of the past. Still, the researchers clarify, “the experiment (at least at this stage) must be seen primarily as a first attempt to apply the technique in a well studied subject (Roman road networks) and, foremost, as a step towards a new interdisciplinary approach in archaeology.”