Scorpion Robot Will Venture Into Fukushima Next Month

The little scorpion that could? 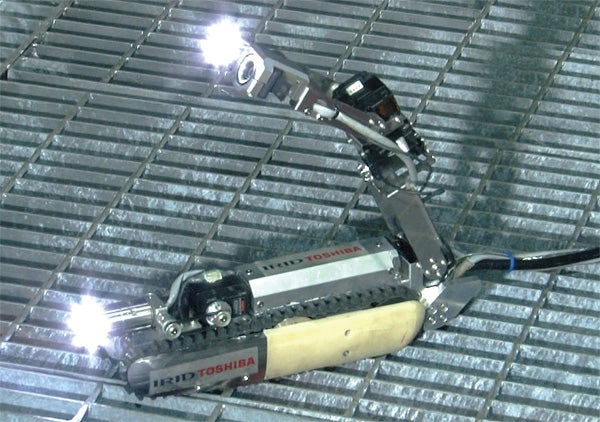 It’s been over four years since an earthquake and tsunami devastated much of Japan’s Pacific coast and left the Fukushima nuclear power plant a hulking dangerous wreck. Four years, and investigators are still trying to get a good look at the dangerous nuclear fuel left inside the three reactors that melted down (last year fuel rods were removed from a fourth reactor building that hadn’t suffered as much damage).

Robots were initially deployed right after the disaster making note of dangerous radiation levels and in the years that followed, other robots began helping with preliminary clean-up. Earlier this year, a snake-shaped robot entered one of the reactor’s containment vessels (where the fuel is kept), only to die after 3 hours unable to cope with the radiation, and unable to pinpoint the fuel.

Now, electronics company Toshiba has come up with another animal-inspired robot, but instead of a snake, it’s a scorpion. The small robot is narrow enough to fit through a pipe, and can flatten itself out into a rigid line to cross gaps or squeeze through tight spaces. But it can also raise its back like a scorpion’s tail, lifting up a camera that can help investigators get an exact location on the fuel. See the robot go through its paces in a simulated power plant:

The robot, tethered to a power supply with a cord, is designed to withstand strong amounts of radiation for 10 hours, and can pick itself back up if it happens to fall over.

The company hopes that the robot (controlled with what looks like a video game controller) will head into the plant at the end of August.