Scientists at The University of Texas at Austin have shrunk a high-energy particle accelerator from the length of two football fields to just 1 inch. 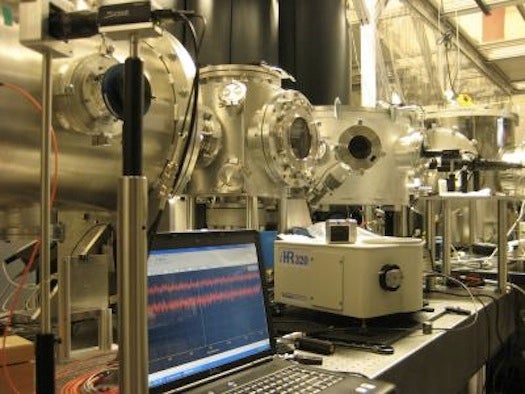 The latest tabletop particle accelerator, built by physicists at The University of Texas at Austin, can generate energy and speeds hitherto reached only by major facilities hundreds of meters long.

The results represent a huge step towards standardizing multi-gigaelectronvolt laser plasma accelerators in labs worldwide. (A gigaelectronvolt is the amount of energy gained or lost by an electron as it moves across an electric potential difference of 1 billion volts. Deep breath. OK.)

“We have accelerated about half a billion electrons to 2 gigaelectronvolts over a distance of about 1 inch,” Mike Downer, professor of physics says in a statement. “Until now that degree of energy and focus has required a conventional accelerator that stretches more than the length of two football fields. It’s a downsizing of a factor of approximately 10,000.”

One of the defining qualities of the 2-GeV accelerator is its ability to produce X-rays of femtosecond duration, the time scale on which molecules vibrate and the fastest chemical reactions occur. With X-rays of this brightness, equal to the caliber of those in large-scale facilities, researchers will be able to observe atomic structures in great detail.

In order to create electrons of the energy level required to produce these X-rays, the team employed laser-plasma acceleration, which involves firing a brief but intensely powerful laser pulse into a puff of gas, using the Texas Petawatt Laser. Though the method was conceived of in the 1970s, a lack of sufficiently powerful lasers to perform it has kept scientists limited at 1 GeV accelerators. 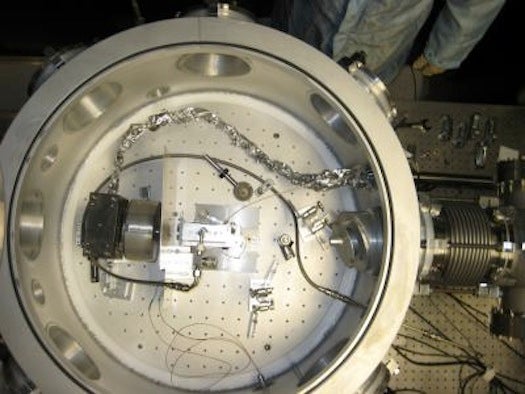 The acceleration, occurring over a distance of about one inch, happens in the interior of the vacuum chamber.

“I don’t think a major breakthrough is required to get there,” he said in the same statement. “If we can just keep the funding in place for the next few years, all of this is going to happen.”