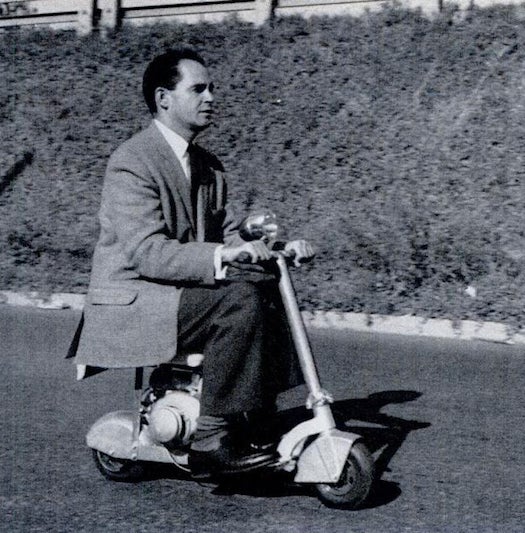 Science is serious business, but sometimes new technology can look a bit silly before it’s widely adopted (and especially if it’s never adopted, like the PistoLaser or the Hoop Cycle.) In this archive gallery, we’ve rounded up nine men who, though incredibly solemn and impeccably dressed, just couldn’t maintain dignity in the face of cutting-edge science. 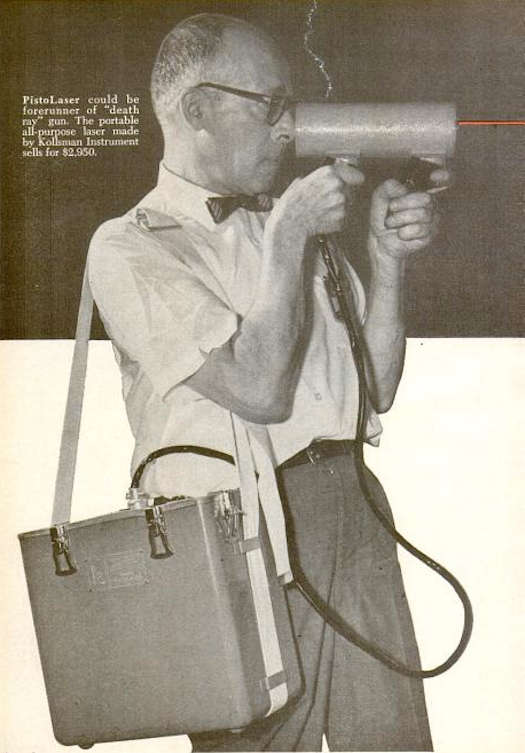 This unnamed (but snazzily dressed) model demonstrates “The Incredible Ruby Ray” – a laser that might one day map the moon, transmit TV shows, cauterize wounds and knock out missiles, PopSci reported in 1962. At the heart of the $2,950 PistoLaser, made by Kollsman Instrument, is a two-inch ruby that amplifies light into a coherent beam. The writer gleefully wonders if the double-trigger device could be a forerunner to a real “death-ray gun.” Read the full story in The Incredible Ruby Ray. 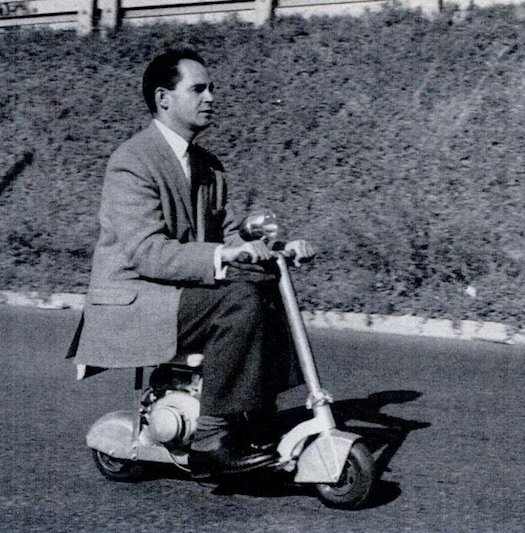 The best thing about the $174.50 JoyRide scooter is that the fashionable modern man can show off his suit all the way to the office. The 51-pound vehicle scoots up to 40 miles per hour and folds down for storage in just 15 seconds. It’s hard to tell from the photo, but I think this businessman is saying “Wheeee.” Read the full story in 40 M.P.H. Scooter Folds into a 51-Pound Package. 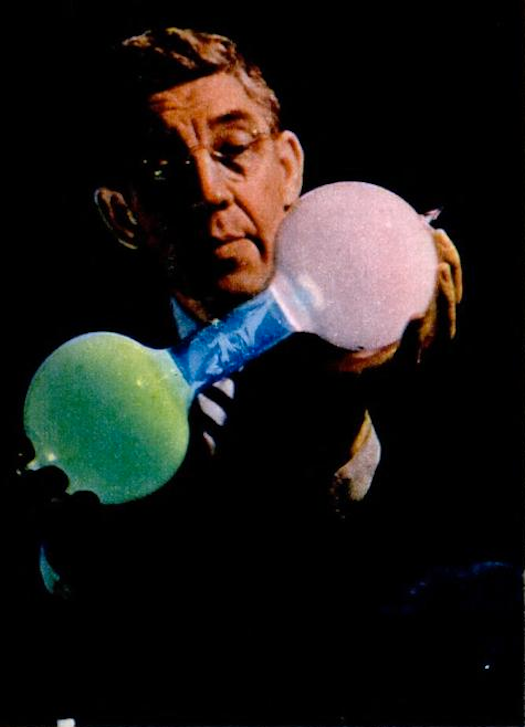 “Just because fluorescent lamps commonly have a tubular shape is no reason for having to make them that way,” according to Samuel G. Hibben, director of applied lighting at the Westinghouse Lamp Division. Pictured here, Hibben’s dumbbell-shaped lamp glows tricolor when high-frequency radio energy bombards its luminescent coating. PopSci called him a “modern sorcerer,” either because he creates futuristic lamps or because he looks like a wizard when he holds them. Read the full story in Lamps of Tomorrow. Dr. A. P. Ousdal is a physician by day, amateur paleontologist by night. By 1940, the California man had collected 500,000 fossils during his weekend (and sometimes midnight) expeditions into the mountains and the Pacific ocean. “Only by comparing the present with the past can we learn the significance of the past,” said the Norway native, cryptically. Here, Ousdal displays a rib from a prehistoric whale. Read the full story in Amateur Collects 500,000 Fossils. 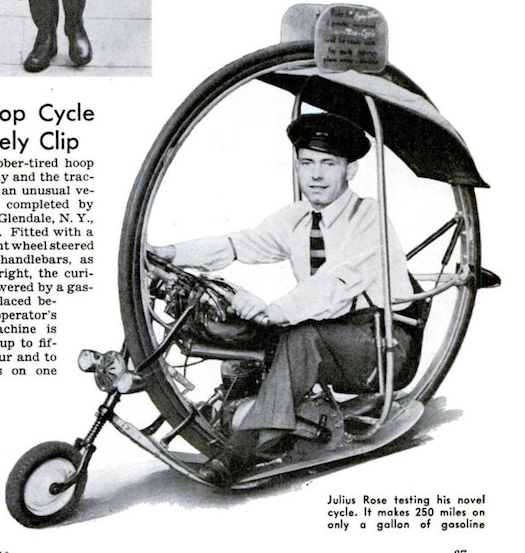 New York auto mechanic Julius Rose created a gasoline-powered hoop cycle and promptly scored this handsome photo in PopSci. The vehicle gets 250 miles to the gallon and can travel up to 50 miles per hour. The article doesn’t describe the other ways in which Julius likes to embarrass his children. Read the full story in New Hoop Cycle Hits Lively Clip. 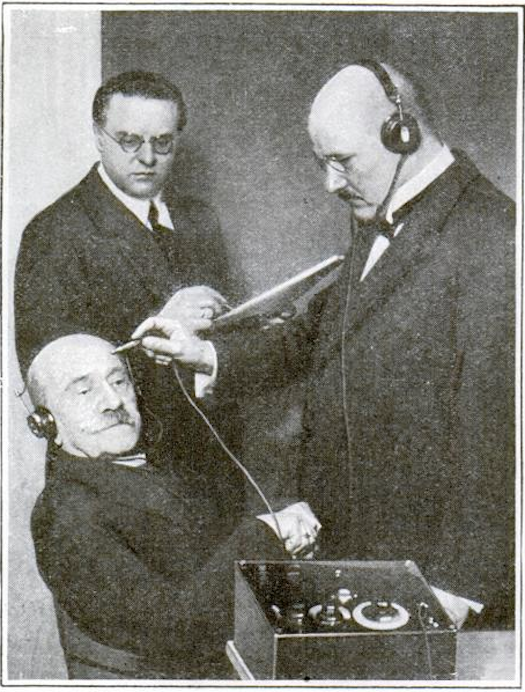 We’re not proud of it, but in 1926, PopSci devoted three full pages to the pseudoscience of phrenology, which claims that the shape of a person’s head reveals their character. Here, an expert uses a special instrument to measure the bulges on a bald man’s head, while a third man looks on with apparent disgust. Perhaps he sees a bump indicating moral decrepitude. Read the full story in Do You Choose Your Friends By Their Bumps?. 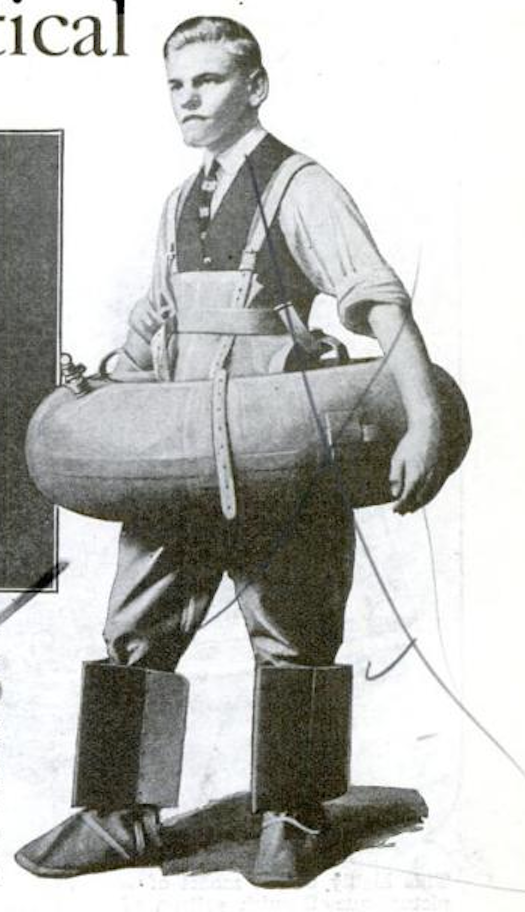 Finally, a practical flotation device: “A combination of inflated tire, rubber trousers, slippers, and leg paddles makes up this ingenious life-preserver, in which … one can sit comfortably in the water until rescued.” The contraption even keeps your dapper outfit dry. Read the full story in New Life-Preserver.

In 1925, U.S. Postal Service employees invented a noncrushable mailbag. The “light and wieldy” bag is reinforced with a quarter-inch of “plymetal,” a new material that absorbs and redistributes “all weight and shock.” Even 200 pounds of posh postal employee? Yes, even this portly engineer could not crush the two empty shoeboxes inside the bag, though he looks happy to be trying. Read the full story in The Inventors Who Speed Your Mail.
popular science archives
Science
The Future Then