Physics Students Say A Gliding Batman Would Die Upon Landing

The feasibility of Christopher Nolan’s Batman franchise has already taken some light hits here at PopSci, but a study from... 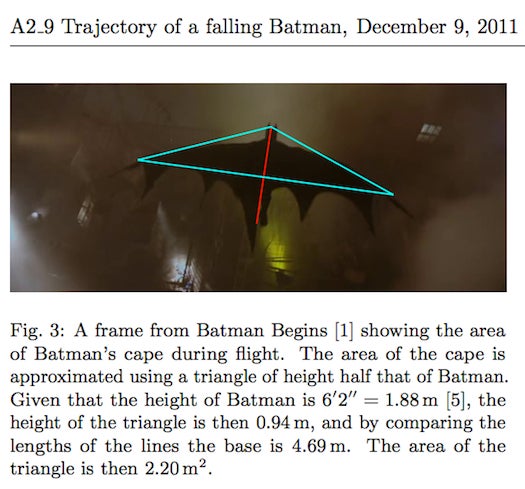 The feasibility of Christopher Nolan’s Batman franchise has already taken some light hits here at PopSci, but a study from physics students at the University of Leiceister is trying to put another nail in the caped crusader’s coffin, saying Bruce Wayne would hit the ground fatally if he were to glide the way he does in Batman Begins.

Overall, depending on your standards, Batman seems to do pretty well in a reality check. The “memory cloth” cape that becomes rigid as a current passes through it was deemed a possible means of flight. But it’s not the flying that gets you; it’s the landing. The students mathematically calculated what his impact would look like, and it’s not pretty. Roughly, it would be about the same as getting hit by a car going 50 mph.

Some possible solutions offered by the students include taking a parachute along, which, they also note, probably isn’t true to Batman’s aesthetic sensibilities. The other option is to try a wingsuit, similar to record-breaker Gary Connery. Either way, according to the study, he’d better shape up, or The Dark Knight Rises could end up being a much shorter movie than has been speculated.