To Your Brain, A Runner’s High Looks A Lot Like Smoking Weed

Endorphins have nothing to do with it 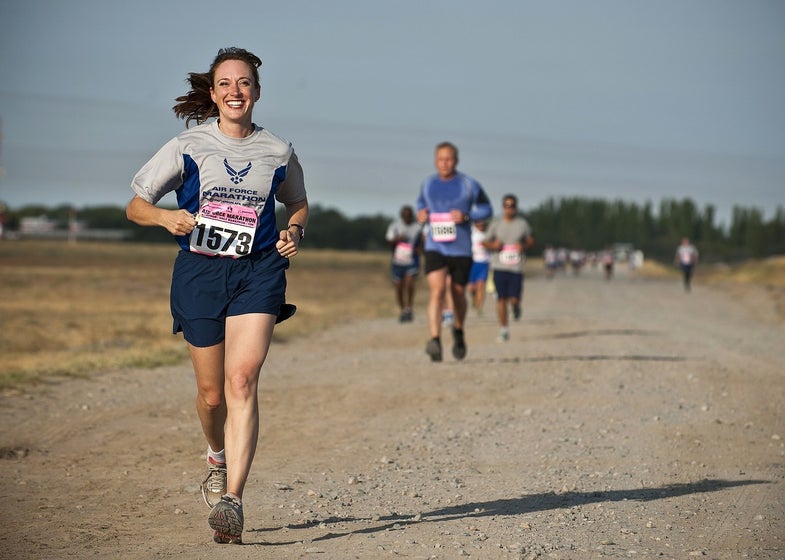 Intense exercise may not feel good to those unaccustomed to it, but does have at least one great perk: a runner’s high, a feeling of relaxed euphoria, which sets in at the end of long bouts of activity. Scientists recently discovered that this happens because exercise causes the body to produce a particular neurotransmitter that makes the body relaxed—the same one trigged by smoking marijuana, according to a study published online this week in PNAS.

For a long time, scientists thought that runners felt great because their bodies released endorphins, hormones that block pain and trigger the brain’s reward system. But recently, researchers realized that endorphins don’t cross the blood-brain barrier, so they weren’t causing the runner’s high, as Chemical and Engineering News reports.

Exercise causes an increase in another of the body’s chemicals called anandamide, a neurotransmitter also known as the “bliss” molecule. This molecule does cross the blood-brain barrier, and when it does, it activates neurons’ cannabinoid receptors—the same ones activated when THC or other chemicals from marijuana are in the blood stream.

To test anandamide’s effects, the researchers trained 32 mice to run on a wheel over the course of three days. Then they split them in two groups; half the mice would run for five hours per day, while the others would not run. They found that the mice that had been running responded with less anxiety to stress tests and were less sensitive to pain when put on a hot plate.

The researchers performed the same tests on two groups of mice: one group was given drugs that blocked only endorphins, while the other group was given drugs to block only endocannabinoids, such as anandamide. The group of mice that had only their endorphins blocked—but could still produce anandamide—reacted in much the same way as the mice that had been exercising. They showed less stress and sensitivity to pain when compared to the group that had the anandamide blocked.

This isn’t the first study to connect endocannabinoids to a runner’s high–several have done so since 2003, even in humans. But by minimizing the possibility that the effect could be triggered by endorphins, this study proves the connection more strongly than others that have preceded it.

To the researchers, these results indicate that cannabinoids are the chemical culprit behind the runner’s high, in addition to the one associated with smoking marijuana. Unfortunately, the researchers could not determine if the mice felt euphoria because “euphoria is a highly subjective feeling that may be difficult to model in mice,” the study authors write. In addition to answering a basic question about our biology, this research could also help develop new treatments for chronic pain or anxiety conditions, or convince those who are reluctant that exercise comes with benefits beyond physical health.