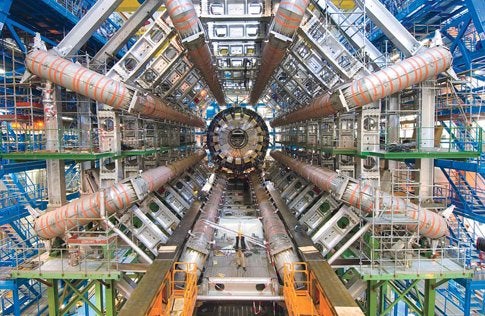 The 14-year effort to complete the Large Hardon Collider was only half the battle. Once the thousands-strong team of physicists and engineers had stabilized the LHC's 1,200 35-ton magnets, the work of finding the Higgs boson, an integral particle for explaining how the universe can exist, could begin. This July two experiments produced what could very well be the illusive particle; both papers were published in September.
SHARE

At 17-miles across, the Large Hadron Collider (LHC) is not only the world’s largest particle accelerator, but it is also a fantastic spot for a 360-degree video shoot. BBC News recently went inside the vast, tunneling underground complex, located near Geneva, Switzerland, and came back out with the panoramic video above. Unless you’re a particle physicist or have 12 friends you can rustle up for a public tour, it’s probably the closest you’ll come to standing near a mini-Big Bang anytime soon.