And this is how we learn that the same data can be used to come to opposite conclusions. 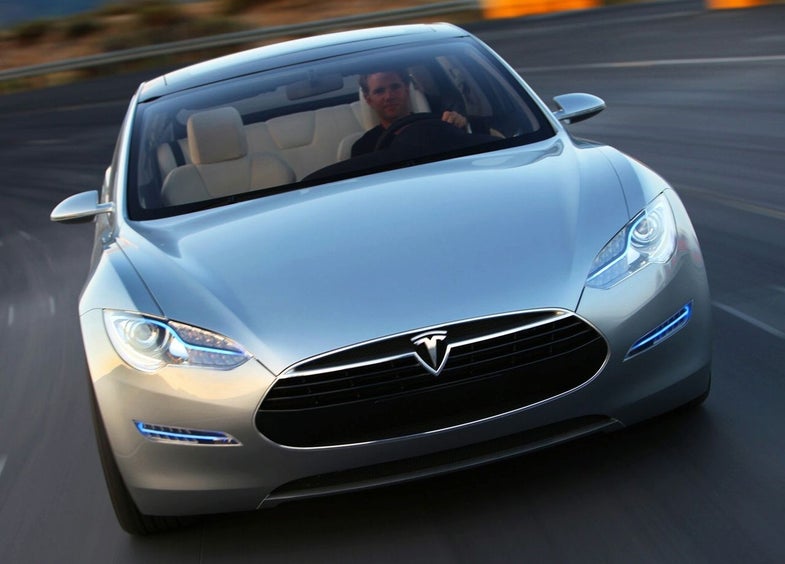 Tesla says the 3,825-lbs Model S, which is powered by a similar all-electric powerplant as the roadster, will get from zero to 60 mph in 5.6 seconds, around the same as a BMW 535i. Tesla Motors
SHARE

And the battle between Tesla’s Elon Musk and the New York Times’s John Broder continues! Broder just published a point-by-point response to Musk’s inflammatory blog post, and it mostly seems reasonable. Broder explains that his half-mile drive around a Connecticut parking lot was simply an attempt to find the “not prominently marked” charger. Broder can’t explain the discrepancy between his claims of setting the cruise control at 54mph and Musk’s data showing that he actually drove at around 60mph.

Broder’s statements are much clearer than Musk’s; the Tesla founder’s blog post referenced image captions, quotes, and assumptions without much transparency, and Broder’s is a very clear response to individual comments. There’s certainly some weird numbers stuff going on here, with some of Broder’s notes not matching up exactly with the data taken by Tesla, but it also seems like Musk attacked the Times article based on some assumptions he drew rather than on what’s in the piece, and also that Musk is manipulating a bit of the data or at least misrepresenting it. For example, Broder did not fully charge the Model S at each stop. That’s true! But Tesla’s representatives told Broder specifically that he had charged the car enough, and that he could proceed comfortably to his next stop. And given that the Model S takes hours to charge, why would Broder charge it longer than necessary?

Clearly Musk is unhappy with the article. I think this is a very telling excerpt, from that post Musk published yesterday:

When Tesla first approached The New York Times about doing this story, it was supposed to be focused on future advancements in our Supercharger technology. There was no need to write a story about existing Superchargers on the East Coast, as that had already been done by Consumer Reports with no problems!

Tesla pitched the Times a story that would suit them, a puff piece. “Hey guys, want to write about the future of our groundbreaking technology?” And then the NYTimes took the access and wrote the piece they wanted to write. Yes, Tesla would have preferred that the Times write nothing but positive things about the company, but that’s not how journalism works; if you’re a subject, you don’t get to choose the story. And it’s increasingly looking like Musk is merely lashing out.