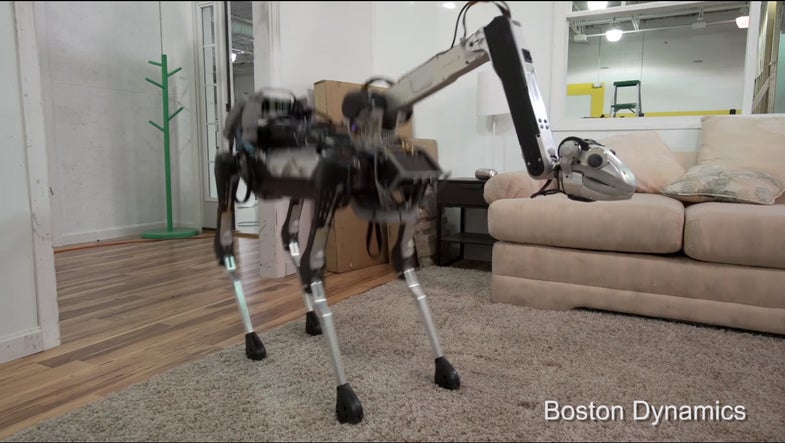 Boston Dynamics, the robotic company that used to be owned by Google, came out with its latest bot: an adorable multifunctional robot that can climb stairs, provide beverages, and even do your dishes. If knocked down, it can also pick itself back up using a mechanical arm on its back. Check it out here. Screenshot from YouTube
SHARE

Robots are not like us. They may inhabit the same spaces, and they may mimic life in their movements, but the kinds of bodies that lend themselves to metal and springs are not the same as those built from flesh and bone. No one knows this better than Boston Dynamics, the formerly Google-owned robotmakers whose shambling, bouncing machines all look like an evolutionary tree from a metal world that forgot about skin. Their latest, SpotMini, combines all that artificial weirdness into a compact, adorable form.

When it gets knocked down, it uses a mechanical arm on its back to get back up again.

It can climb stairs.

Bring someone a beer (and then fight them for it).

And even take care of dishes!

Most of these features are neat, but it’s the quiet that really stands out. Boston Dynamics’ Legged Support System (or LS3) was made for the military, and then rejected because it was too loud. Shortly after, Google put the company up for sale, likely in part because they lacked an immediate product for sale. SpotMini doesn’t meet the same military requirements as the 400 pound LS3, but it shows these robots can be quiet, which is an absolute necessity for the battlefield.

Plus it’s just a delight to see in action. Watch this thing below: