Watch As An Autonomous Truck Zooms Down The Autobahn 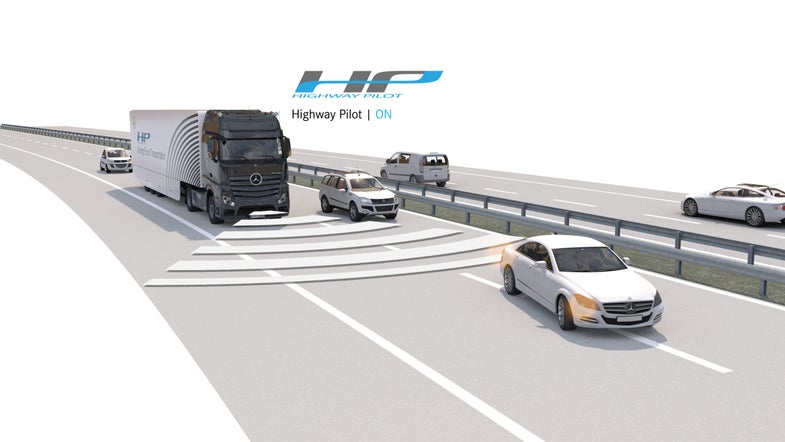 When driving on Germany’s notorious ultra-fast Autobahn, you generally hope that the other drivers have their hands firmly on the wheel. But last Friday, there was at least one giant freight truck on the Autobahn whose driver took a more hands-off approach, allowing the truck itself to take a turn at the wheel. And everything went just fine.

The test on Friday was a demonstration of Daimler’s Highway Pilot system, a network of radar and camera sensors that allow a truck to be semi-autonomous on the road, lessening, but not eliminating, stresses on the driver. It keeps a safe distance from other cars, either cruising on a highway or stuck in a traffic jam, and sends a wake-up-call to the driver if it senses that he or she might be drifting off to sleep.

In a statement released by Daimler, the company said:

In Nevada last May, the Freightliner Inspiration (also made by Daimler) became the first autonomous truck driven on public roads. Both the Freightliner Inspiration and Daimler’s other autonomous truck venture, the Future Truck 2025 are concept cars, with interiors designed to allow a driver to turn over complete control to the car’s driving system, and monitor the truck’s progress on a tablet.

The drive in Germany last week was made in a Mercedes-Benz Actros truck, a freight truck already in production in Europe. The company simply updated the truck with the Highway Pilot hardware and software, allowing it to function as an autonomous vehicle.