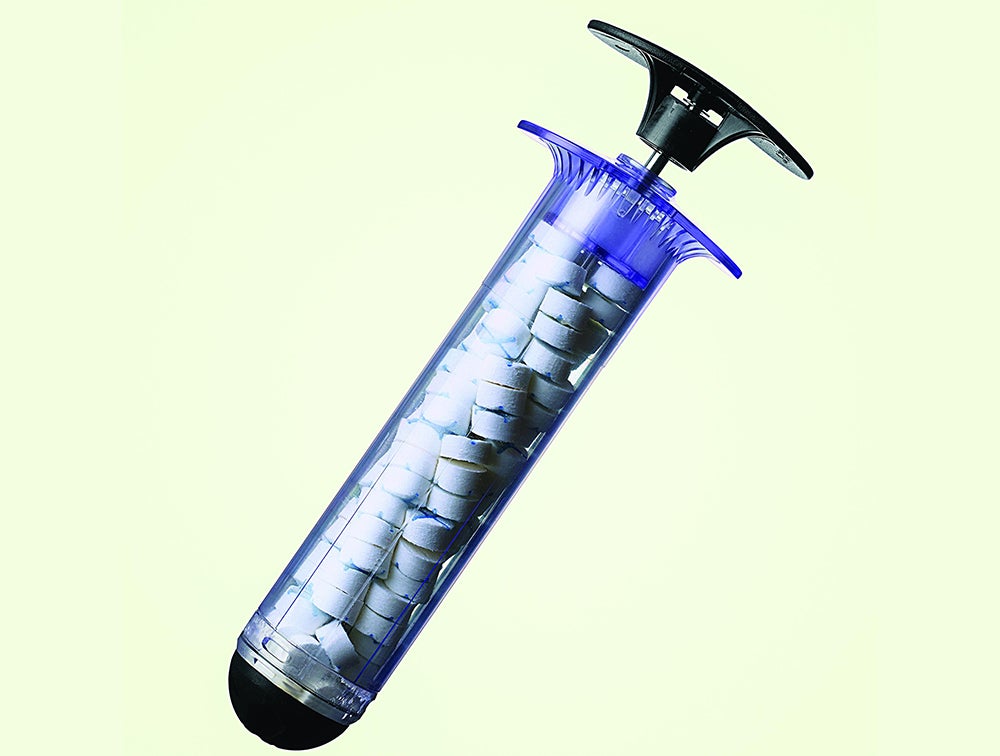 The pocket-sized XStat, a hemorrhage-stopping invention we wrote about in February, yesterday received approval from the U.S. Food and Drug Administration as a first-of-its-kind medical dressing. This means that the U.S. Army, which funded development of the sponge-filled syringe, can now purchase XStat to be carried by military medics.

XStat plugs gunshot and shrapnel wounds faster and more effectively than the standard battlefield first aid. Currently, medics treat hemorrhage by stuffing gauze as deep as five inches into an injury—a painful process that doesn’t always work. Of soldiers who died between October 2001 and June 2009 of wounds that weren’t immediately fatal, blood loss was the killer in an estimated 80 percent of cases.

The 2.5-ounce syringe slides deep into a injury, such a bullet track, and deposits pill-size sponges that soak up blood and rapidly expand to stem bleeding from an artery. Each sponge is coated with chitosan, a substance that clots blood and fights infection. The FDA says the sponges are safe to leave in the body for up to four hours, allowing enough time for a patient to get to an operating room. To ensure they don’t get left inside a wound, X-shaped markers make each sponge visible on an x-ray image.

Created by veterans and engineers at Portland-based startup RevMedx, XStat is the first battlefield dressing designed specifically for deep, narrow wounds in areas like the armpit or groin, where medics can’t place a traditional tourniquet. RevMedx, along with Oregon Health and Science University, is now developing a version of the device to stop postpartum bleeding.