It was likely unarmed, but still a weapon of war. 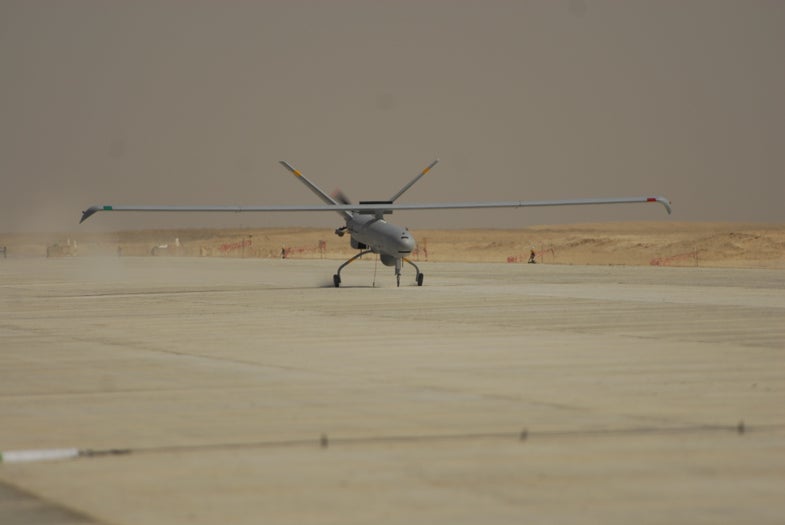 A drone of this make and model flew over Gaza on August 3. Elbit Systems
SHARE

Drones are the public face of counter-insurgency. Mechanical, unmanned, distant, they fly above battlefields from Pakistan to Yemen, their unblinking electronic eyes streaming video back to uniformed pilots secure on military bases elsewhere. The United States is the best-known drone operator in the world, but it’s hardly the only country that uses them. The Israel Defense Forces are using drones over Gaza as part of “Operation Protective Edge,” the IDF’s term for their latest anti-rocket operations in the strip.

The Aviationist reports that, for the first time, Israel is deploying a modified Elbit Systems Hermes 450, with a new antenna on top and carrying underwing pods, over Gaza. (To see what it looks like, check out The Aviationist post; the drone pictured above is not the drone in question.) The underwing pods could be fuel tanks for longer flights, though speculation exists that they instead contain either light missiles or guns. According to the brochure from the drone’s manufacturer, it doesn’t carry any weapons itself, instead using only surveillance and targeting equipment. Many American drones function that way too, providing information and targeting coordinates for other, armed parts of the military. Drones are especially useful against irregular fighters because they can fly for a long time, and catch movement when it eventually happens. Speaking to the recent conflict and the dearth of images of Hamas fighters, New York Times photographer Tyler Hicks recently noted:

If the drone was carrying weapons, it wouldn’t be the first time Israel’s used an armed drone. During the 2006 Lebanon War, Israeli drone footage showed hellfire missiles, like those used by American drones, in flight. In 2010, the Wall Street Journal ran footage of an Israeli drone strike in Gaza from the 2009 Gaza war, known as “Operation Cast Lead.” Israel is a major drone exporter, and at trade shows Israeli companies display both native-made drone armaments and Israeli drones armed with foreign munitions. According to the Pew Research Global Attitudes Project, while much of the world remains opposed to drone strikes, only one country’s population supports American drones strikes more than the United States, and that’s Israel.