Invention Awards 2014: Stash Your Bike Helmet In A Briefcase

Biking to work has never been more convenient. 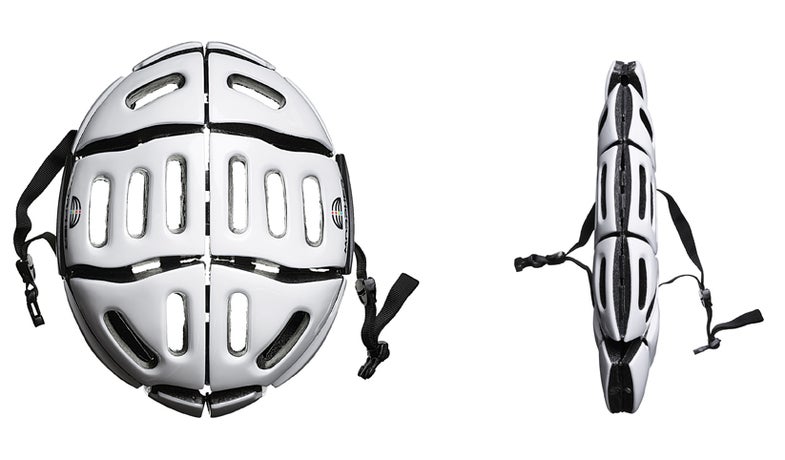 Jeff Woolf was riding down a narrow London street when an irate driver clipped his bike. The car’s fender snagged Woolf’s pedal, flinging him headlong into a curb. As ambulance workers triaged Woolf’s broken body, they marveled that his skull had remained in one piece; his helmet, they said, had saved his life. Twenty years later, Woolf saw few London bike share riders wearing helmets, so he invented a model that’s as handy as a bike itself. Called the Morpher, his creation is a full-scale helmet that folds to the size of a textbook.

Woolf’s timing couldn’t be better. The duration of bike rides in the U.S. has more than doubled since 2001, trips are up 25 percent, and cities around the world—Chicago, Dublin, Montreal, and more—are launching or expanding bike share programs. Yet while helmets can reduce the risk of head injuries by 85 percent, less than half of American cyclists wear them.

A traditional helmet’s bulk is a major turnoff for casual riders. (Around 83 percent of bike share users cite inconvenience as the reason.) What’s more, their domed shape makes it difficult to fit more than a few into vending machines near bike share racks—the main reason such devices are found nowhere. The Morpher addresses both problems by collapsing to just 1.4 inches thick (the model here collapses to 2.5 inches). It’s compact enough to fit in a laptop bag and stack efficiently in a kiosk. The latest prototype has passed European-grade safety tests at a factory, and Woolf expects the next design to meet U.S. standards as soon as this summer.

Hard plastic and foam, like that found in traditional helmets, protects a wearer’s head.

An internal, flexible layer links segments of foam, acting as a hinge and allowing the helmet to fold in half.

Neodymium magnets inside the helmet lock the Morpher in a closed position.

Click here to see a thermal radar with omniscient view, a robotic exoskeleton, and more from our 2014 Invention Awards.