Video: A Jet-Powered Train That Made History 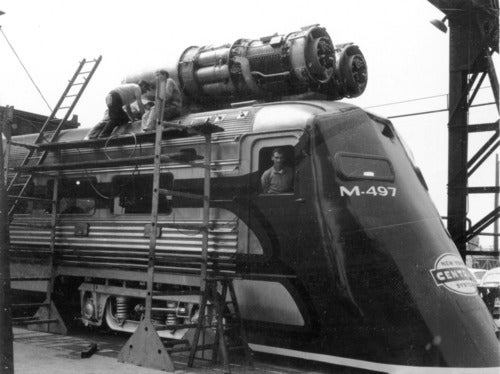 Engineer Don Wetzel always loved trains, ever since his dad took him on trips to Ohio trainyards when he was a kid during the Depression. After joining the Marines, he spent some time as a military pilot, and became familiar with jet engines. In July, 1966, Wetzel combined these interests, leading a team that strapped two GE J47-19 jet engines onto the top of a modified railcar–and let rip.

“We wanted to prove that we could run trains faster over conventional rail and gather technical and operating data,” Wetzel said. “We didn’t think we were making history.”

But history he made. On that fateful day Wetzel piloted the train to a speed of nearly 184 mph and the car rocketed from Butler, Ind., to Stryker, Ohio. To this day it holds the record for being the fastest self-propelled train. Wetzel said in the video below that he would have pushed the train even faster had he known his exact speed, and “sure as hell” would have beat the land speed record at the time, which was 202 mph.

Check out the video of Wetzel telling about his speeding adventures, and for footage of the actual train in motion: