Vibrations and pressure could be key to making a shot that doesn't hurt. 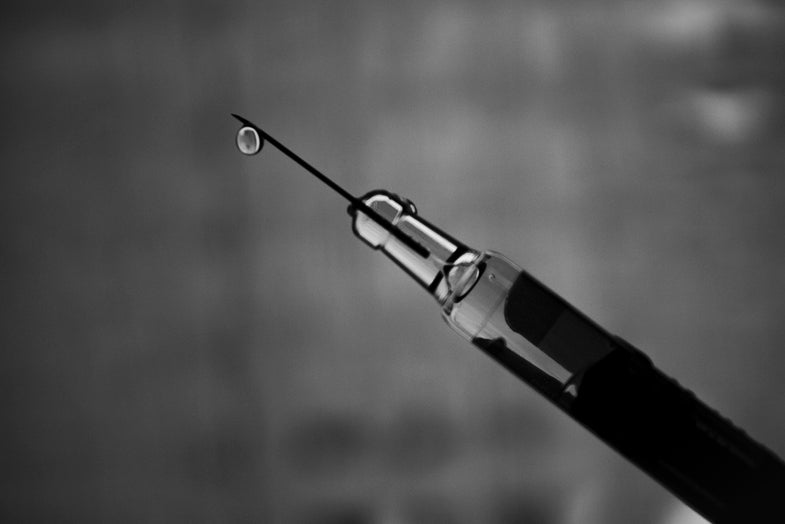 Scared of needles? You aren’t alone. According to some estimates, as many as 1 in every 10 people are frightened of needles, and experts fear that the fear of pain may deter people from getting important injections at the doctor’s office.

But what if getting a shot didn’t hurt? That’s the idea behind new research presented at the annual meeting of the American Society of Anesthesiologists, which showed how vibrations and pressure applied to the injection site right before a shot could reduce pain.

“Our early research suggests that using a device that applies pressure and vibration before the needle stick could help significantly decrease painful sensations by closing the ‘gate’ that sends pain signals to the brain,” lead author of the study William MacKay said in a press release.

The ‘gate’ that MacKay refers to is related to the gate control theory of pain. The theory basically says that pain occurs for people when it reaches the brain, and the stimulus that causes pain has to travel through neurological gates along the spinal cord to get there. By occupying those gates with other sensations (like vibrations or pressure), the sensation of the needle stick is able to slip by our neurological defenses.

The study was small, with a sample size of only 21 people, but the researchers are hopeful that by quantifying people’s perceptions of pain they can help other researchers develop or improve devices already in the works that have the same goal. And there are plenty of people and companies interested in finding a needle that doesn’t hurt or terrify patients. Other vibrating needles are slowly making their way towards the market, and, as we reported a few weeks ago, some researchers are developing pills with needles inside that you can swallow.