Next year, the worldâ€™s biggest drill will chew a 47-foot-wide hole under the Niagara river like a hand drill in sheetrock. 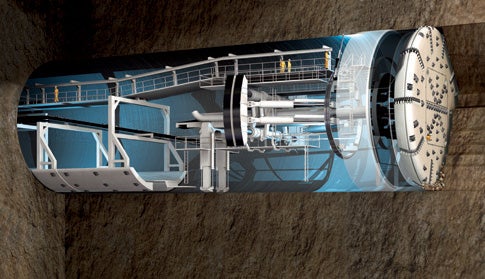 Cutting:
The teeth of the MB471-316 machine, now under construction, are 85 rolling steel disc cutters meticulously arranged on a cutter face (also made of steel) that rotates up to seven times a minute. The cutters, each nearly two feet long, will be among the largest ever made for tunnel
digging. They spin freely to carve
concentric circles in the rock and produce more than 1,600 tons of
rubble an hour. The face of the drill contains a small door through which workers can crawl to replace the 15 or so cutters that wear out every day.

Removal: As the pieces of cut rock fall to the ground, muck scoops in the side of the head collect and deposit them into chutes. As the head rotates upward, the debris falls onto a muck conveyor belt, which ferries it to the rear of the machine.

Movement: Hydraulic cylinders attached to the drill´s spine propel it forward like an inchworm. To stabilize the machine as it crawls, steel shoes push outward, gripping the tunnel walls, while two retractable legs lift off the floor.

Power: Fifteen electric motors supply the machine with a record-breaking 6,375 horsepower. The drill is tethered to a cable carrying 13,800 volts.

Stability: As the machine excavates, two drills just behind the cutters bore into the unsupported roof. Workers fill the holes with bolts and grout, turning the rock into a protective canopy.

Control: The machine operator sits in a cabin [not shown] located at the center of the machine, where he controls all its functions, including its speed and direction. Video cameras give people above- and belowground a full view of the drill and the hole.

Backup: The machine tows nearly 800 tons of backup equipment through the tunnel, including trailers for electrical support systems, firefighting supplies and even a lunchroom.