The first prosthesis that merges mind and machine 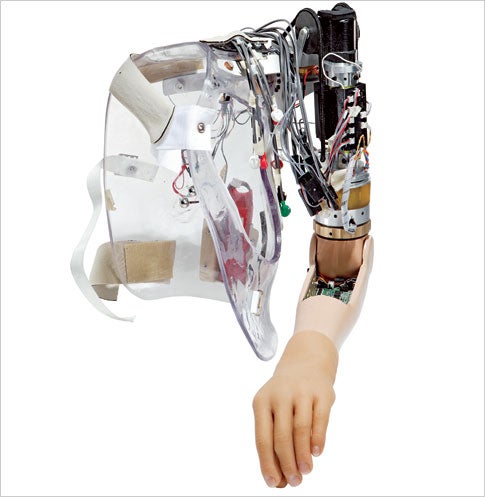 Welcome to the future of prosthetic limbs: true mind control. For the first time ever, an amputee need only think about a movement-picking up a glass, for instance-and the 12-pound Neuro-Controlled Bionic Arm dutifully coordinates the task. Electrodes intercept the limb’s residual nerve firings and feed them to a computer embedded in the forearm, which then commands six motors to move the device’s shoulder, elbow and hand in unison. Thanks to hand sensors, the wearer can even gauge pressure and fine-tune his grip.

For now, the prototype arm fits just one man, Jesse Sullivan. This year, Sullivan demonstrated the device at the Rehabilitation Institute of Chicago, where doctors are working to refine it. A faster, more durable commercial version should be ready by 2008, but the ultimate goal is a robotic limb that functions as well as, if not better than, its human analogue.