Consumer demand may drive PDA tech, but G.I.'s jumped to the head of the class with their rugged, waterproof, networked units. Will they stay out front? 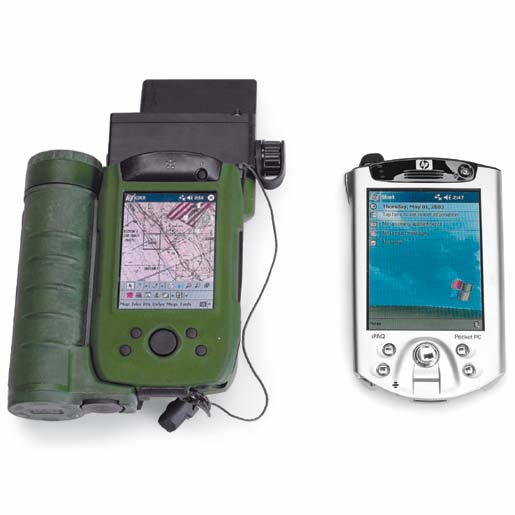 Your PDA tells you many things–the time of a meeting, the phone number of a colleague. It entertains with games and MP3s. But it does not tell you to step right to avoid a landmine. It does not tell you to pull the trigger. Not unless you are a Marine, that is, and the device is the D-DACT, a PDA the military hopes will do nothing less than take war into the wireless age. Instead of drifting dangerously out of touch, soldiers will be networked through D-DACT modems, which communicate over military radio frequencies. They can share enemy positions and other tactical data, creating a common picture of the combat zone. At its core, the D-DACT is a 5500-series HP iPAQ, with 128 megabytes of RAM, a 400MHz processor and a 64,000-color screen. The consumer iPAQ looks like your typical chrome-colored handheld, but the military version wears fatigues–an olive-drab, ruggedized, waterproof case. An external battery pack gives the D-DACT up to 16 hours of continuous operation versus the iPAQ’s 3. D-DACT has a built-in GPS system that, unlike consumer versions, resists signal jamming. “The D-DACT is a super-PDA,” system engineer Frank Stepanski says. The question is, will it remain that for long? The first field deployments are expected to take place in January and proceed through 2005 and 2006. Consumer technology keeps evolving, but the Marines won’t issue replacements until at least 2007.