Mobility: Why just roll around when you can make tracks with PowerTrike? 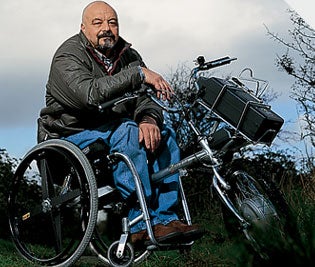 Sure, he had played wheelchair basketball and other sports. But Vincent Ross, a paraplegic since a car accident in 1974, wanted to go off-road by converting his existing chair into a kind of all-terrain vehicle. It needed to be powerful, stable, and easily controlled. The toolmaker set to work, and today Ross’s PowerTrike conversion kit involves long handlebars, hand brakes, a twist-grip throttle, a battery, and a big knobby-tire wheel with a 150-watt Honda electric motor-the whole ensemble fitted to the front of his chair. So configured, the chair, which in profile looks like it was redone by a Harley enthusiast, can easily zip over uneven ground, even power uphill on wet grass. The unit can be fitted to any standard or folding wheelchair in about half an hour (it raises the small front wheels off the ground once attached) and it’s bicycle-fast, up to 15 miles per hour.

“You can do everything in it,” says Ross, “and it comes apart very quickly. Pack it in your car and off you go. It’s also easier to pack on planes and take on holiday.”

Ross and partner Andy Gammans formed a company called pdq mobility to manufacture and market the PowerTrike in England, where it won the BBC’s Invention of the Year Award. The first kits for America were shipped to a company called HarMar Mobility in Florida in late November.

In Baton Rouge, Louisiana, 21-year-old Eric Searcy was intrigued by the PowerTrike but skeptical that he’d be able to handle it: He’s been a quadriplegic with severely limited use of his hands since he was hit by a drunk driver two years ago. After a turn around the neighborhood, though, Searcy was a PowerTrike believer. “I was just cruising down the street, going to meet my friends. I can’t wait to go out in the woods with it. I love it to death.”