A 102-Foot Slide, a Sensory Deprivation Pool, and More Science-As-Art From Carsten Höller

A trip to the New Museum's Carsten Höller exhibit, where up literally becomes down 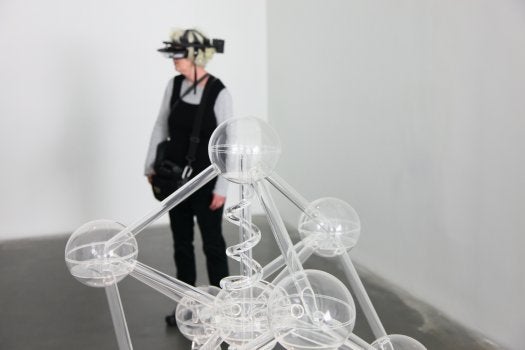 The New Museum in lower Manhattan is home to the first large-scale survey exhibition of the work of German artist Carsten Höller, a scientist-turned-artist whose works straddle the line between both worlds, often seeming more like an experiment than an exhibit. At the current exhibition, you can stick your head under a fish tank, wear inversion goggles, or float weightlessly in a sensory deprivation.

Click to launch a tour through Höller’s new exhibit.

Carsten Höller began his career studying agricultural entomology, but after receiving his doctorate from the University of Kiel in Germany in 1988, he decided to seriously pursue his artistic inclinations, which resulted in exhibitions resembling laboratories rather than traditional art spaces. In his previous work, he fed a test group of reindeer hallucinogenic mushrooms and teamed up with the artist Rosemarie Trockel to create an exhibition where gallerygoers observed pigs through one-way glass. (The pigs remained inscrutable.)

In this latest exhibition, says Massimiliano Gioni, the associate director and curator of the New Museum, viewers become “test subjects, participating in an experiment.” By taking part in the exhibition, they become the scientific observer as well as the subject in Höller’s unique studies of human perceptions.

The New Museum will be hosting Carsten Höller: Experience at 235 Bowery in New York through January 15th, 2012. 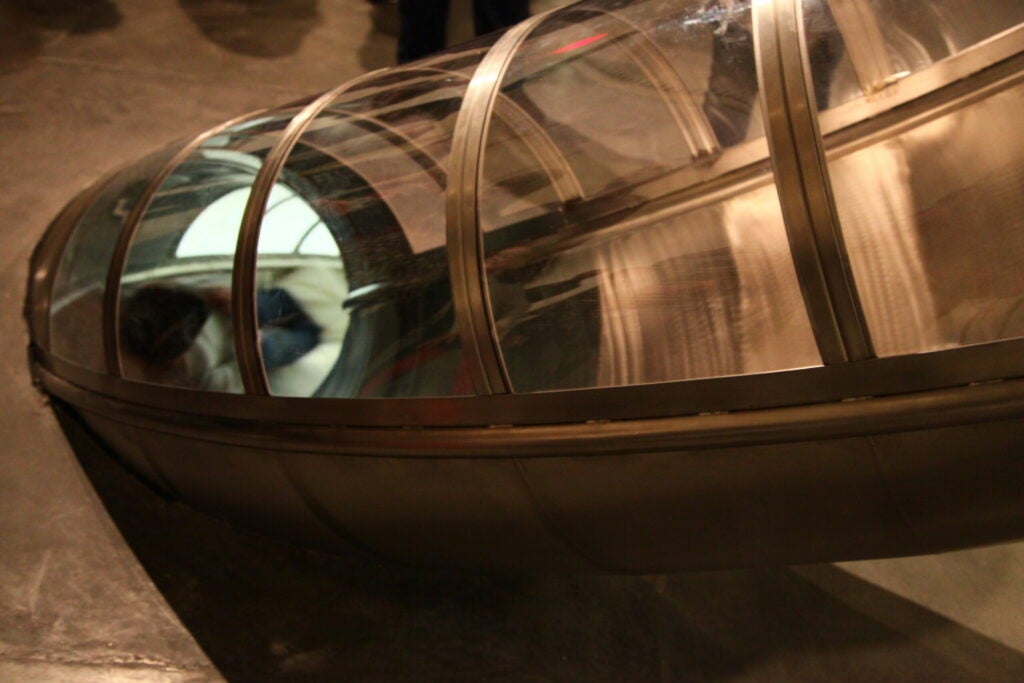 This has got to be one of the best things the New Museum has invested in since its inception in 1977. The stainless steel slide is 40 feet high and 102 feet long, spiraling from an opening in the fourth floor down to the second level. The upper half of the slide is made of polycarbonate, so you can see quick flashes of terrified and ecstatic people as they woosh down the pneumatic-looking tubes. On the fourth floor, canvas sliding mats are handed out to prevent friction, making for a quick trip down two stories. All sliders are instructed to “ride feet first on their back” by the man in black holding a walkie talkie at the top. A sign near the opening states, “Elbows must be tucked in and arms placed across the chest or on your lap. Slide down with head slightly raised.” Even if you follow the instructions, be prepared to be a little bruised and battered once you reach the last turn, and don’t be surprised if you scream. It’s a doozy. 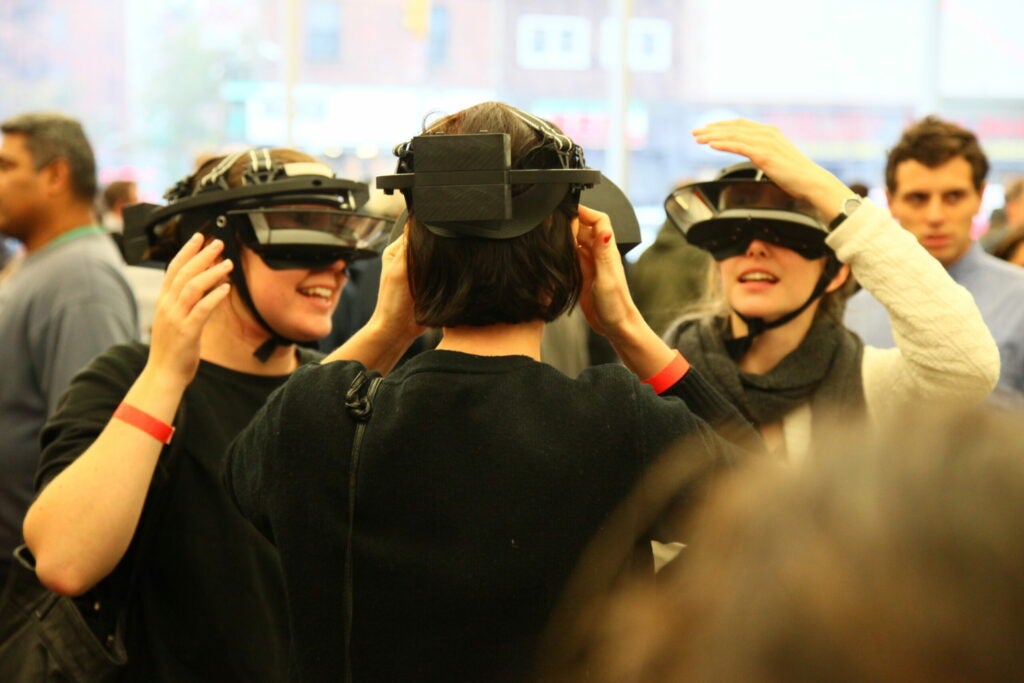 The slide understandably attracted lots of visitors, but the real selling point is the Upside Down Goggles (see if you can guess what they do). In order to put on the goggles, which are made from aluminum, polyethylene, foam, leather, nylon, and acrylic glass, one must sign a waiver and then plunk down a credit card, agreeing to pay $1,500 “in the event the goggles are damaged or not returned.” The waiver for the Upside Down Goggles reads, in part: “I understand that this disorientation (and beginning to overcome it) is part of the point of this artwork.” Excited yet? The embedded mirrors will make you feel drunk, disoriented, and impervious to gravity as your vision is completely inverted. Wearing them is pretty much like walking on the ceiling, which it turns out is not as easy as Lionel Ritchie implied. It’s more like, “What the hell just happened? I have no depth perception and just ran into a defenseless old lady.” But once you get over the fact that you look like a moron, you’ll start having a lot of fun. We suggest you grab a friend and try to reach out to connect hands; it’s harder than it looks. We also suspect that sci-fi enthusiasts will have no shame wearing the sleek bands around their eyes in public, sort of like Sony’s 3-D goggles. When the curator of the exhibition, Massimiliano Gioni, tried on the goggles, he even exclaimed, “Beam me up, Scotty!” 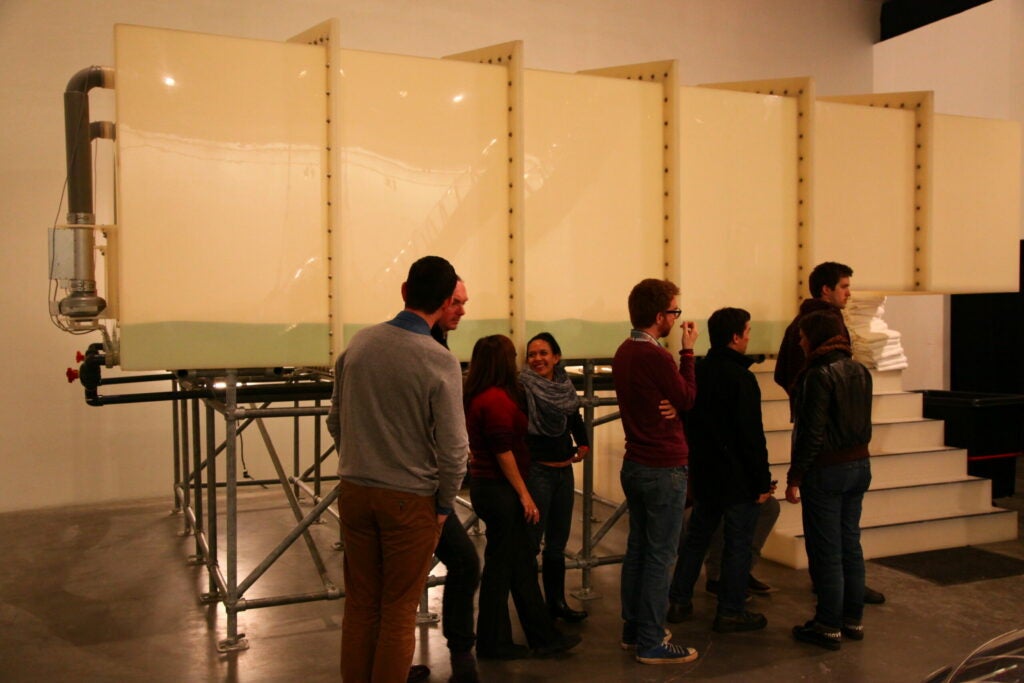 This polypropylene tank is filled with water and magnesium sulfite (aka Epsom salt). It’s set at a lukewarm 98 degrees in order to mimic the participant’s natural body temperature, and the continuous-flow water heater makes sure it stays that way. Cotton towels and bathing gowns are provided, but the waiver stipulates that you either have to be nude or wearing a bathing suit to participate in the interactive space, so get ready to disrobe in a semi-opaque cube before entering the water. It also advises people to “take a shower PRIOR to entering the Tank.” But how many people will abide by this schoolmarmish plea for cleanliness? Those who get up the nerve to strip down will float in neutral gravity, though they are instructed to not stay longer than 10-15 minutes, lest there be “negative health consequences.” 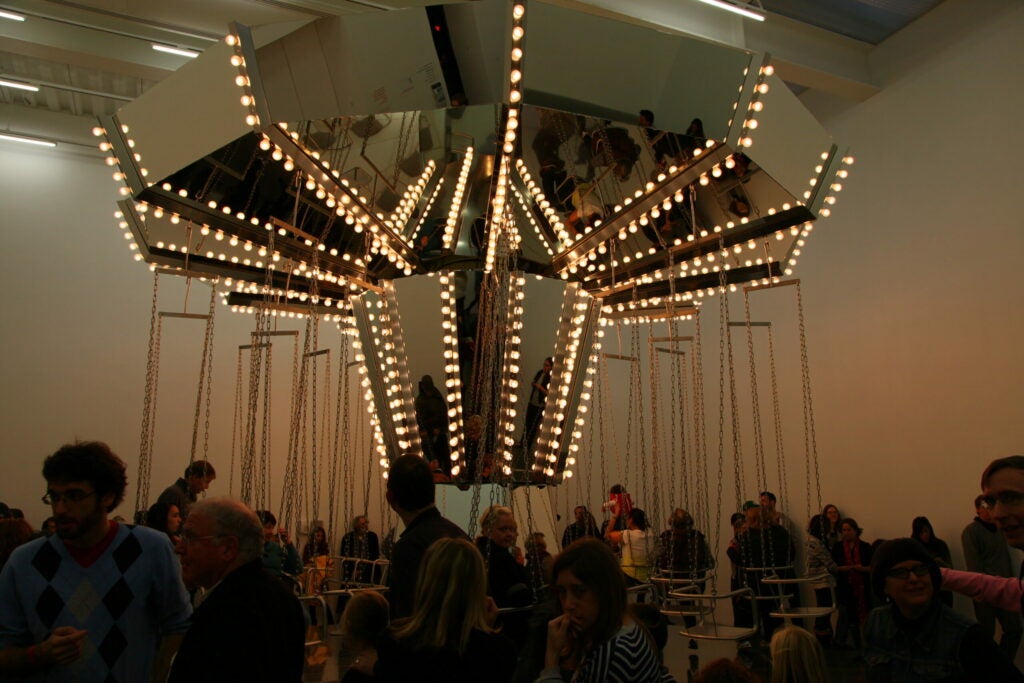 The carousel has everything you would expect from one: stainless steel chains and seats, tiny light bulbs that give off a warm glow, and a whole lot of mirrors (mounted on MDF panels), except it lacks even a single horse. Instead, it boasts similarly chromed-out seats. What’s really unexpected is the pace of this altered carnival mainstay; the carousel very slowly rotates clockwise, making a full rotation every minute and a half–much slower than a typical equine carousel. Juxtaposed against the entrance to the slide, which was about fifteen feet away, it made for a study in slow motion. The carousel measures about 25 by 15 feet, which is about four feet less than a standard model. 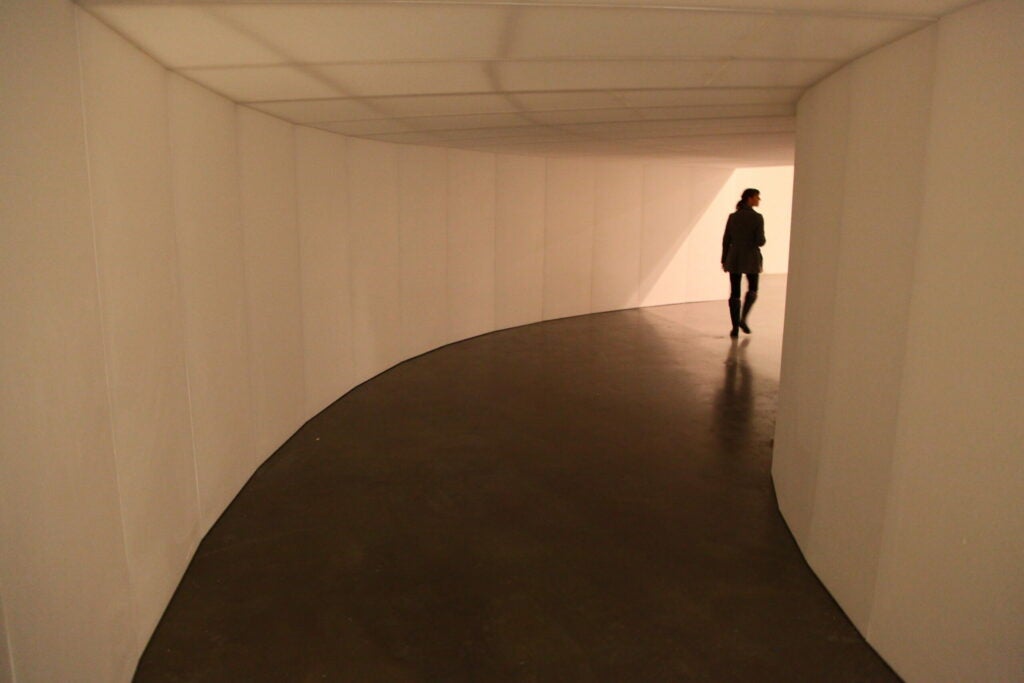 This 48-foot “Swinging Curve” is made of polystyrene panels, wood, and metal wire. Visitors can walk through the tunnel and pop out right next to the slide on the third floor. Here, you can watch people whoosh by every minute or so as they make their descent to the second floor. Also on this floor is the 20 x 13-foot sensory deprivation tank, which sloshes and hums as each person takes a dip. 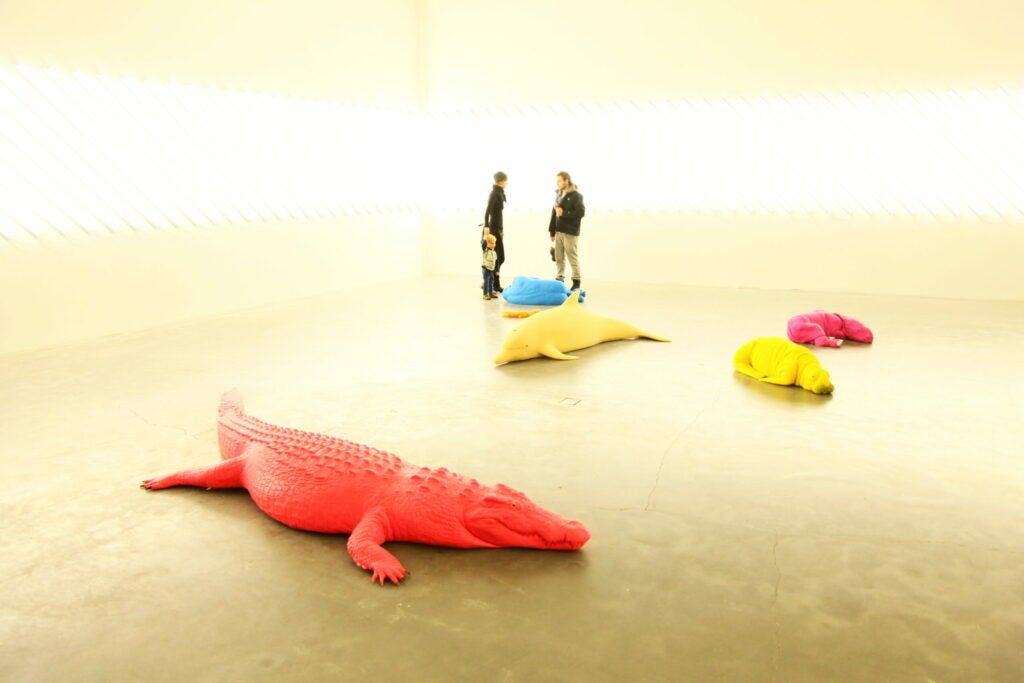 This diagonal pattern of strobe lights blinks on and off rhythmically, like a light switch being turned on and off at regular intervals. If you walk behind the slide and toward the wall, you’ll find animals made out of polyvinyl, polyurethane, or pink synthetic resin. There’s a dolphin, a crocodile, a rhinoceros, a hippopotamus, and a sad walrus with delicate black whiskers. They all have beady blue glass eyes and some, like the dolphin, even have artificial eyelashes. Bivouacked on land, they observe the second floor gallery goers with a kind of day-glo resignation, like ravers left alone after a party is over. 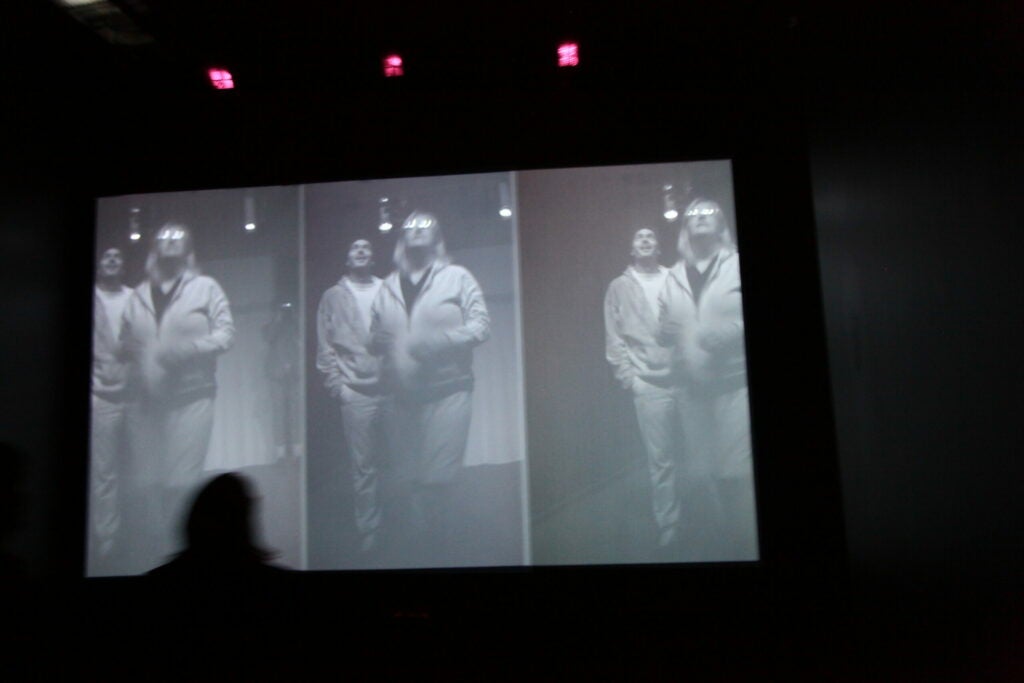 The number three unifies this room. There are three infrared cameras, three lamps, three video projectors and three computers that use light to present a ghostly likeness of viewers back to them. More specifically, the three cameras create a triptych, and one of the cameras is on a split-second delay, creating a slightly unreal version of the filmed user. After entering the dark room, some people hopped up and down, others waved their hands frantically, and others just stood there and laughed as they saw their image on screen. One teenage girl kept giggling with her friends, saying, “What are we supposed to do?” Another girl replied, “Jump!” 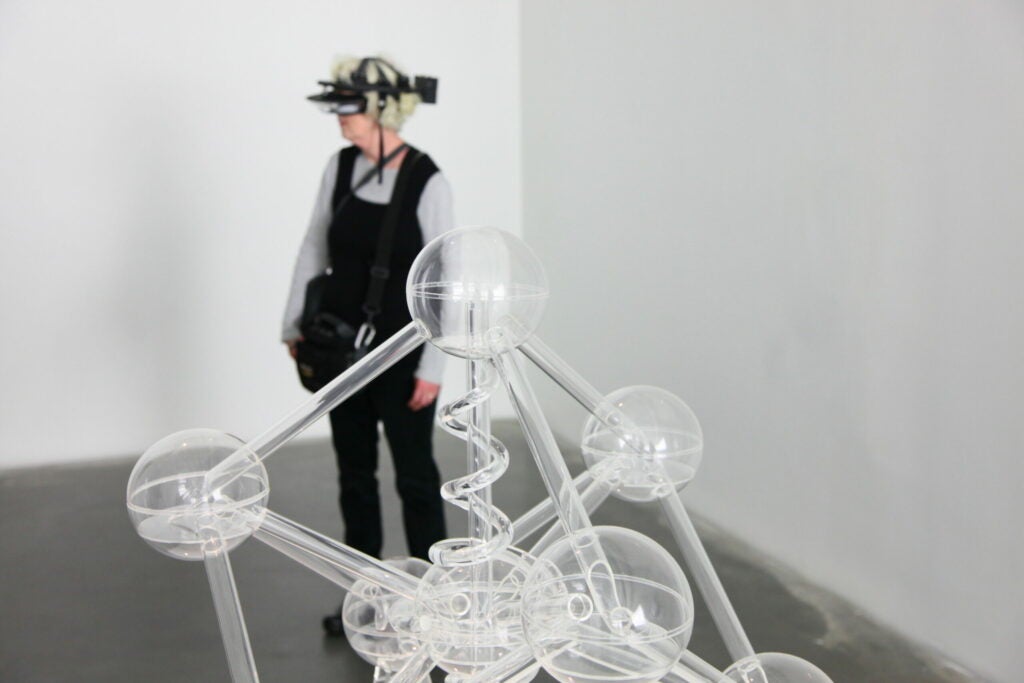 The “Atomium” design was envisioned by the engineer André Waterkeyn and dates back to the 1958 World Exhibition in Belgium, where a massive, 335-foot model of the nine-sphered molecule served as the centerpiece of the Fair. The crystalline iron molecule was blown up to about 165 billion times its original size. Here, Höller shrank the architectural landmark, making it much more brittle than the original metallic version–this transparent acrylic glass objet d’art is mounted on a white acrylic glass plinth and measures 55 1/8 x 55 1/8 x 55 1/8 inches. If you knock this over while wearing the Upside Down Goggles, we imagine that it will shatter into a thousand expensive pieces. 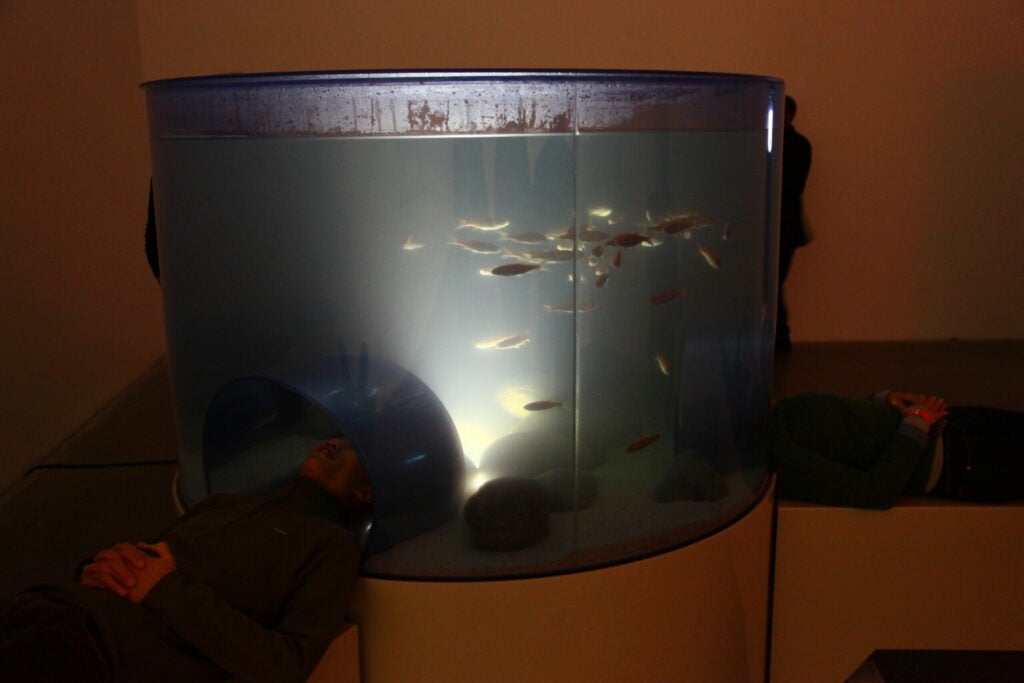 Every stoner has probably had this idea–“what if you were in the tank?”–but Höller went ahead and made it. The aquarium’s tank is made from PVC glass and polyethylene, with a filter system to keep the fish alive, as well as heating rods, a pump, water, stones, sand, and Leuciscus idus, a freshwater fish commonly found in Europe. The tank measures about five feet in diameter and 5 ½ feet high, and there are three benches emerging from the bottom of the aquarium so that viewers can lie down and insert their heads into the viewing area. There’s even a gel-like pillow at the end of the bench, so people can comfortably watch the fish lazily swim by above them.