Over three decades, AeroVironment has led the way in innovative, low- powered transportation. 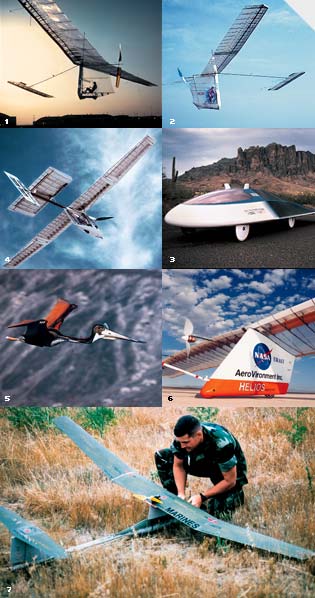 Paul MacCready becomes the “father of human-powered flight” when his 70-pound Gossamer Condor completes the first sustained, controlled human-powered flight. Two years later, his team flies the Gossamer Albatross, which has a 96-foot wingspan and is built mostly of plastic and carbon fiber, across the English Channel. That flight, made by cyclist Bryan Allen, takes a stately three hours to accomplish, though it covers only 23 miles.

With DuPont sponsorship, the Solar Challenger–the world’s first piloted solar-powered aircraft–
flies 163 miles from Paris to the coastline of England, at an altitude of 11,000 feet. Photovoltaic cells and DuPont’s lightweight materials pave the way for a generation of solar-powered vehicles.

Partnering with GM, AeroVironment’s Sunraycer wins a 1,867-mile race across Australia, averaging 41.6 mph and beating the field of 24 solar-powered vehicles by two days. This leads to the development of the first production
electric vehicle, GM’s EV-1.

5: Pterodactyl
A mechanical version of the prehistoric creature, this craft has a sophisticated autopilot and flaps its wings. It stars
in a 1986 IMAX film, On the Wing.

The solar-powered high-altitude Helios research aircraft is a significant leap toward the goal of non-polluting flights in the stratosphere. Helios could serve as a semipermanent 11-mile-high “sky tower” capable of multichannel wideband communications.

The 10-pound Pointer becomes the first unmanned aerial vehicle to be wielded by front-line military units as a remote monitoring and surveillance tool. The aircraft transmits real-time video to the pilot and other observers on the ground. Other applications considered for Pointer include air pollution sensing and chemical weapons detection.