Is the International Space Station visible to the naked eye in the night skies?

The International Space Station is occasionally bright enough in the night sky to be seen by the naked eye ... 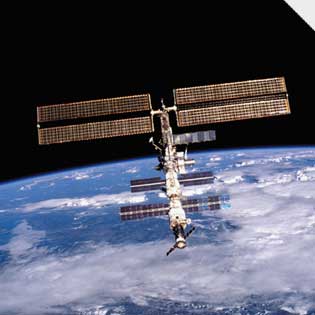 Like many other satellites, the International Space Station is occasionally bright enough in the night sky to be seen by the naked eye. It is in one of the lowest orbits possible, about 242 miles overhead. The ideal viewing time is immediately before dawn or after sunset, when the observer is in the dark and the ISS is in sunlight. Circling the globe in slightly different orbits 15 times a day, the ISS passes over most of the Earth in a 24-hour period. A number of Web sites will tell you when the ISS will pass over your location–www.heavens-above.com is one. (This site has more than 2 million cities and towns in its database.) Traveling at about 4.8 miles per second, the station is not likely to be over your home for more than about 10 minutes.