Space-bound? Triple Nickel will tell you what to look for up there. 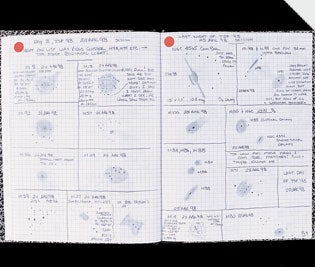 Triple’s notebook: “One of the most impressive works of art I’ve seen,” says a fan.

NASA pilot Jack “Triple” Nickel has had some of the most extraordinary naked-eye views of space that a person can have, short of actually being in space. Try a night watch of the heavens while flying at Mach 2 in an F-15 at 45,000 feet, for example, or seeing the full moon from the giant windscreen of the high-tech Super Guppy cargo plane. A quarter-century of relishing such views, first as an Air Force pilot, then as a military and civilian pilot for NASA, helped Nickel become the space agency’s unofficial resident astronomy expert, the man who tells the astronauts what they’re going to see up there.

Nickel remembers the night in 1994 that truly fixed his gaze starward. He was on air defense alert at Ellington Field in Houston when his crew chief and friend Bob Taylor brought in a homemade 8-inch Newtonian telescope. The comet Shoemaker-Levy 9 had collided with Jupiter, and Taylor proposed to show Nickel the aftermath of the event. Nickel asked security to turn out all the lights. Security balked (missile-laden F-16s, that sort of thing) until Nickel insisted that he, as commander, would take full responsibility, and the base then went dark in the interest of amateur science. “We saw the spot where the comet had impacted,” he recalls. “I’ll never forget the feeling of awe.”

Nickel’s passion for stargazing soon extended to the matter of grinding and polishing Pyrex glass for his own 8-inch telescope. “Taylor convinced me that if you hand-grind your own mirror you can come up with a higher quality telescope than if you buy one. Without a doubt that’s true, if you have the patience.” Patience translated to about four months of workshop time.

Today, Nickel often points out astronomical features to NASA astronauts as he takes the Shuttle Training Aircraft to 35,000 feet to practice steep-angle landings. He regularly briefs members of the Johnson Space Center Astronomical Society (www.ghg.net/cbr/jscas) on astronomy fundamentals, and his reputation for passionate, clear instruction has led to invitations from astronomy clubs all over Texas. Last year, Nickel was the guest of honor at the Royal Astronomical Society of Canada General Assembly.

Vera te Velde, a 15-year-old junior at the Oklahoma School of Science and Math in Oklahoma City, says that when she set up her telescope next to Nickel’s last March at JSCAS’s annual spring star party at Ft. Mc Kavett, Texas, she learned more from him than from all the books she’d ever studied. “I remember looking through Triple’s logbook, which I consider one of the most impressive works of art I’ve ever seen. Astronomy had been my passion for years, but it wasn’t until I met Triple that I realized how vital a sub-field amateur astronomy is. Amateur scientists are the ones who remember the original motive for research: the beauty of the night sky.”

M13 Globular cluster in the constellation Hercules, “like a tightly packed snowball of stars.”

NGC4565 Galaxy in the constellation Coma Berenices, seen edge-on, very bright in the center, with a dust lane that creates a dark division down its side.