Hidden gems you're not supposed to see 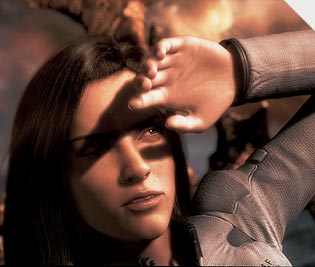 In the film Final Fantasy, Dr. Aki Ross saves the Earth. On the DVD, she dances like Michael Jackson.

There’s more to DVD movies these days than just the film and cast bios. Moviemakers are increasingly including Easter eggs-hidden bits of amusing or wacky material that you can find only by snooping around. They’re activated with a few clicks of the remote control. We asked Mr. DVD, Netflix.com’s James Rocchi, for his list of the five coolest.

What You’ll See: A hilarious series of flubs from the movie’s making.

What You’ll See: The computer-generated characters doing their own rendition of Michael Jackson’s “Thriller” video.

What You’ll See: A 156-minute extended version
of the movie with an alternate ending.

How to Access: Go to the Special Edition menu screen, highlight the words Play Special Edition and enter the number “82997” (which is the date of the movie’s original release).

Mr. DVD Sez: “OK, the alternate ending is hokey, but who can resist an extra-heaping helping of T2?”

What You’ll See: A 12-minute montage of concept artwork and special effects test footage.
How to Access: Go to the Special Features menu, then to Cast and Crew biographies. The page about the writing-directing Wachowski brothers contains a small red pill-highlight it and press “enter.”

What You’ll See: Test footage of a cut scene in which Russell Crowe’s Maximus faces down a computer-generated rhino.

Mr. DVD Sez: “With a budget as bloated as the rhino, this scene ended up on the cutting room floor.”