One man, lots of opinions 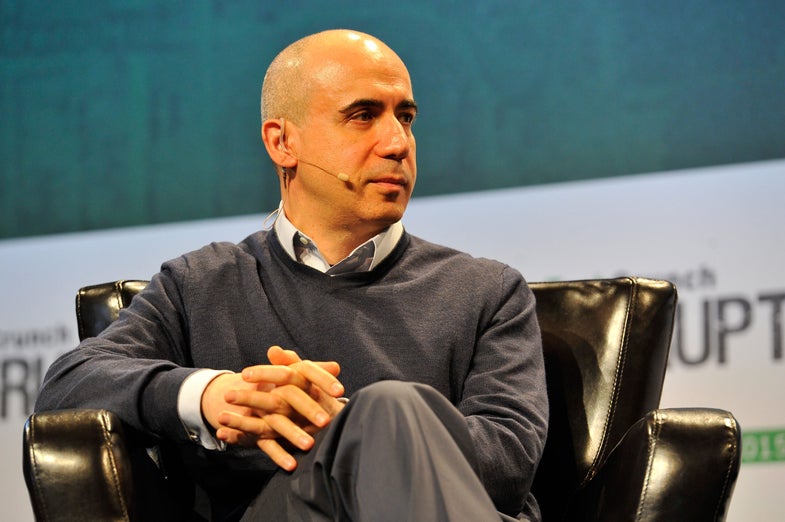 At 54, Russian-born billionaire Yuri Milner has earned his place among the elite venture capitalists. He’s gotten in on the ground floor of some of the biggest companies in tech, elevating his new worth to about $3 billion. But as a trained physicist and a person who thinks on a global scale, his predictions vault far beyond Silicon Valley. Here are 9 of the most amazing predictions he’s made over the past few years.

1. Social media will be huge.

Milner first made headlines in 2009 when he invested $200 million in a little startup called Facebook. That gamble ended up being worth $2 billion, according to the Wall Street Journal. His company, DST Global, invested another $400 million in Twitter in 2011, and $125 million into WhatsApp. He told the New York Times that he had a hunch that social media could be a powerful force, after watching the print market get weaker Russia in the late 2000s. “At the time, I was probably the best-informed person in the world about social networking monetization,” he said.

2. Physicists should earn as much as athletes.

Trained as a physicist himself, Milner believes that science is one of the things that makes us uniquely human. In his opinion, the most innovative scientists weren’t doing enough. So he, along with tech gurus Sergey Brin, Mark Zuckerberg, and Jack Ma, created the Breakthrough Prize. First awarded in 2012, the winning researchers receive $3 million to continue their work.

“I wanted this amount to be meaningful,” Milner told Reuters in 2012. “I think top scientists need to be compensated at a different scale in society. Somebody with experience will tell you that true scientists are not motivated by money – they are motivated by the quest itself. That is true. But I think an additional recognition will not hurt.”

“Big Internet companies on average are capable of generating revenue of $1 million per employee, and that compares to 10 to 20 percent of that which is normally generated by traditional offline businesses of comparable size,” Milner said during a presentation at the Yalta Annual Meeting in September 2011. That’s an efficiency that’s not going away, he said, citing the example that one engineer at Facebook can support about a million users. The downside, though, is that when “inefficient” brick-and-mortar businesses go bankrupt, middle-class people lose their jobs, as Reuters points out.

Milner estimated then that 20 percent of retail sales will be done online by 2020. It looks like we might not hit that mark—in the final quarter of 2015, ecommerce accounted for 7.3 percent of total commerce sales, according to the U.S. Census Bureau. And, bizarrely, some online retailers like Amazon are going back and building physical stores. Milner might not have been right on the money for this prediction, but there’s no denying that online sales continue to grow.

4. Genetics are the future of health.

With the advent of next-generation sequencing, scientists can decode part or all of a person’s genome more quickly and cheaply than ever before, leading to innovations that bolster research and help patients in the process. In 2014, Milner and sequencing company Illumina started an incubator for genetics startups.

“Next-generation sequencing has reached the lift-off stage,” Milner said at the time according to Business Wire. “I’m excited to support this endeavor promoting innovation and entrepreneurship in the genomics ecosystem and look forward to working with Illumina, the global leader in sequencing technology.”

5. We can find extraterrestrials if we listen carefully.

Milner believes extraterrestrial life is out there, and he wants to hear it. So last year he pledged a $100 million over the next 10 years in a project called Breakthrough Listen. Two different research teams will listen to 1.5 billion channels of radio frequency and look for laser pulses in an effort to find intelligent life. “The idea is to bring a Silicon Valley approach to the search for life,” Milner said, as Popular Science reported. “That is, an approach to data that is transparent, that is innovative, and that uses the power of crowdsourcing.” Milner also found an important ally in the effort: The one and only Stephen Hawking.

“The idea is to bring a Silicon Valley approach to the search for life.”

6. The Internet is a global brain.

If two heads are better than one, what does 7 billion heads get you? We’re quickly finding out, as more people on the planet get onto the Internet. Calling it “a bit of a futuristic picture,” Milner predicted that, “the emergence of the global brain, which consists of all the humans connected to each other and to the machine and interacting in a very unique and profound way, creating an intelligence that does not belong to any single human being or computer,” according to Reuters and the New York Times.

8. The world will run on Bitcoin.

In 2014, Milner’s company invested an undisclosed amount in a Hong Kong-based startup called Xapo, designed to let clients store and spend Bitcoin. That fits in well with his prediction that ecommerce is the place to be. Unfortunately, Bitcoin’s promise seems to have run its course in the time since then; in January, longtime Bitcoin developer and advocate Mike Hearn published a blog stating that, “despite knowing that Bitcoin could fail all along, the now inescapable conclusion that it has failed still saddens me greatly,” as Forbes reported. Xapo seems to still be in business, and there’s still time for Bitcoin to bounce back, but it’s unclear if Milner has lost any money on his investment.

No matter where you stand on Uber’s labor practices, there’s no denying that the ride app has been wildly successful (its founder, Travis Kalanick, is worth $6.2 billion). Milner is still kicking himself for not investing in Kalanick’s company when he had the chance early on. He didn’t do it because he feared that Kalanick wouldn’t be able to handle the inevitable legal battles that would (and have) cropped up all over the world, according to Forbes. “I underestimated Travis. That was a big mistake,” Forbes reported. “I have not been sleeping well.”