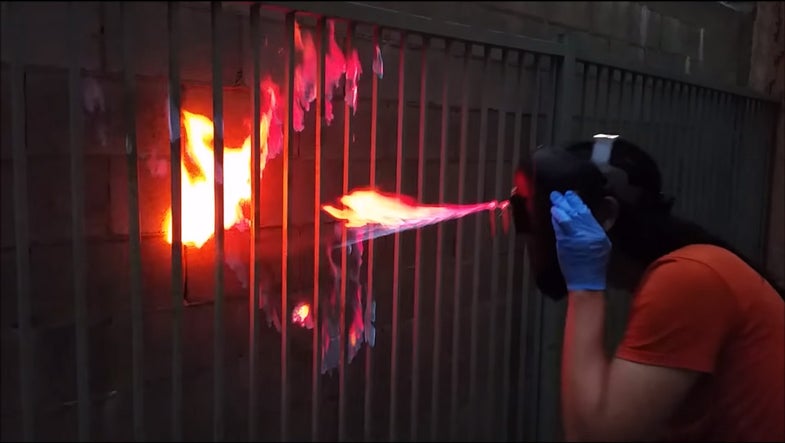 For the mutant Scott Summers, better known as Cyclops from the X-Men, his vision is a curse. When opened, his eyes unleash tremendous power–beams of energy that devastate anything in their path, only kept in check by his ruby-quartz eyewear. For Summers, this power is a curse, something he can’t turn off. For YouTube user Sufficiently Advanced, a helmet with Cyclops’s powers is something to emulate. Only instead of directed energy, Sufficiently Advanced uses fire.

Yes, that’s a welding mask with two flamethrowers mounted on it.

The system is fairly straightforward: a bump attached to the welder’s mask squirts fuel (likely lighter fluid) past two lit pilot lights, where it is ignited, sending forth jets of flame. The pyrotechnic display is a better fit for St. John Allerdyce (the villain Pyro in the X-Men universe), but the visor/Cyclops connection still works.

Flamethrowers, it’s worth noting, are weapons so horrific that their use by soldiers on people during war is prohibited by international law. Still, they’re unwieldy weapons, so civilian use is lightly regulated in the United States. All of this is to say that, well, it’s probably not a great idea for you to wear fire on your face, and it’s a worse idea to use it for crime-fighting.